Anyone thinking of getting this game? It looks so damn awesome that I'm planning on buying it. I don't know much, but there's an article in the new GamePro I got yesterday in the mail and it's looking great graphics wise. I was told it's coming out for both the PS3 and the XBOX 360, so I might pick it up for that.

Here's a link to the Wiki page. It's also coming out on the PC as well.


"The game takes place during the Third Crusade, in the year 1191. The player assumes the role of Altaïr (الطائر, Arabic, "The Flyer"), a member of the Hashshashin sect (the original "assassins"), whose objective is to slay the nine historical figures who are propagating the Crusades. As the player finds and kills these targets, their conspiracy is unveiled. The player will be able to travel through three cities: Jerusalem, Acre and Damascus."
Last edited: Jul 10, 2007

Oh yeah. This game looks ****in awesome. I like the design of the main character.

Totally. It's one hell of a design.

And you spelled Assassin wrong.


thee great one said:
And you spelled Assassin wrong.
Click to expand...

This and Heavenly Sword are the only 2 reasons I wanna buy a PS3.


But I'll still end up holding off.

Victor Von Doom said:
This and Heavenly Sword are the only 2 reasons I wanna buy a PS3.


But I'll still end up holding off.
Click to expand...

Somebody from Udon did the cover for GamePro and only drew the guy with four fingers, which were very thick. It looks so weird.

This game is awesome.


There is a weird plot twist at the beginning of the game that makes the whole idea seem off, but it actually works better as it goes. And if what I think will happen, happens that it would be even better.

The levels are stunning. There are so huge. You can climb and jump anywhere.

The gameplay reminds me of GTA and Spider-Man 2. Free mode while doing missions. There isn't much variety to the missions, but it's fun enough that it never really gets boring. The voice acting is great and the major assassin's are very cinematic.

i got this last thursday, still haven't had a chance to play it, should be good though

Ice said:
Somebody from Udon did the cover for GamePro and only drew the guy with four fingers, which were very thick. It looks so weird.
Click to expand...

this game is what the next zelda should be.

Gemini said:
his right ring finger was cut off so he can have a blade protrude from it for assasinations
Click to expand...

That makes sense on what planet?

That makes sense on what planet?
Click to expand...

he has a blade attached to a sliding sheath on the inside of his forearm, his right ring finger was cut off as part of a ritual for the assasin's guild he's a part of, so when he clenches his fist the blade will slide through the whole caused by the lack of the finger, allowing him to kill people more efficiently or something

I didn't know that. I didn't even know he was missing a finger.

This game is ****ing awesome. Period.

Just watching it is entertainment.

I just beat. Horrible ending that is obviously for the sequel.


It was a awesome game and I seen in the credits that Kristen Bell did one of the voices. 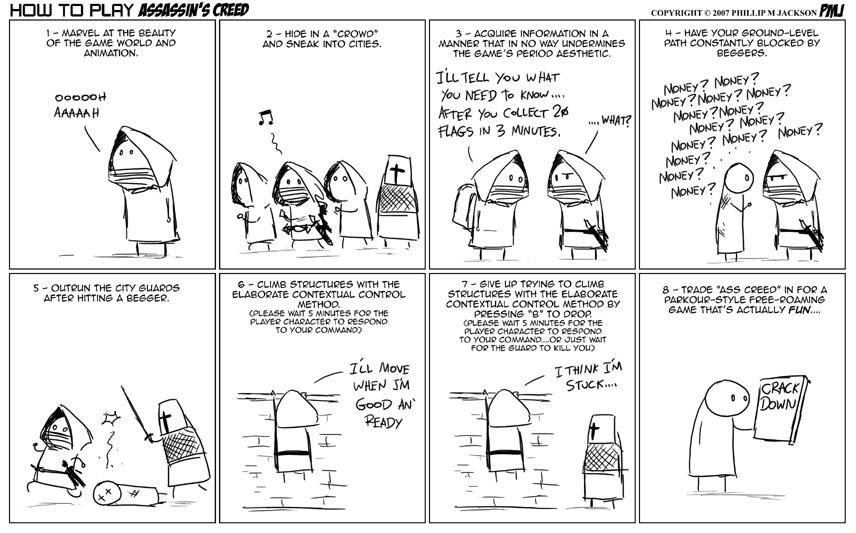 That is all
You must log in or register to reply here.

Comics Shipping November 25th: Party! Like It's Ice's Birthday! Because It is.