in trade if any good

BIGBY IS COMMIN' BACK! :rockon:

I'm thinking about starting up Y too. . .

the Nightwinng summary helps prove what happens to Jason Todd
He lives and becomes Nightwing/imposter and murders someone, you see the same knife in Nightwing's hand that Red Hood uses.

DETECTIVE COMICS #818
BATMAN #652
ROBIN #149
NIGHTWING #119 - Two Nightwings huh? Jason Todd and Dick Grayson maybe?
BATMAN: YEAR ONE HUNDRED #3
INFINITE CRISIS #7 - Perez cover baby.
VILLAINS UNITED: INFINITE CRISIS SPECIAL
BIRDS OF PREY #93
BLUE BEETLE #2
CRISIS AFTERMATH: THE BATTLE FOR BLUDHAVEN #1-2 - A crisis mini with a writing team I enjoy? Done.
FIRESTORM: THE NUCLEAR MAN #24
ION #1 - I'm not a Ron Marz fan, but I'll give him a first arc try on a new Kyle Rayner book.
JONAH HEX #6 - Nuns with Guns. NUNS!
JUSTICE #5
JLA CLASSIFIED #20 & 21
JSA #84
JSA CLASSIFIED #11 - Verry happy that this is basicly a second monthly JSA title focusing on goos adventures over the massive character work we seem to get in the other. And so far everythings been in continuity, unlike another classified title...
MANHUNTER #21 - Crap... Thats Dr. Mid-Nite on the cover... I'm going to have to finaly check this book out.
OUTSIDERS #35
SEVEN SOLDIERS #1 - All things must come to an end. Shame most of the minis dind't.
TEEN TITANS #35 - I wonder if they're going to try to launch a new Doom Patrol book out of this arc. As long as its better than the last one I might try it out.

Wildstorm
EX MACHINA SPECIAL #1 - Jack Pherson...
CAPTAIN ATOM: ARMAGEDDON #7 - Okay, so we've got Infinate Crisis, Seven Soldiers, and this ending in April. My pull list for May is going to be so much lighter.
TEAM ZERO #5

Looking like a good month. Seems a bit light on Vertigo for me, but I'm not complaining. 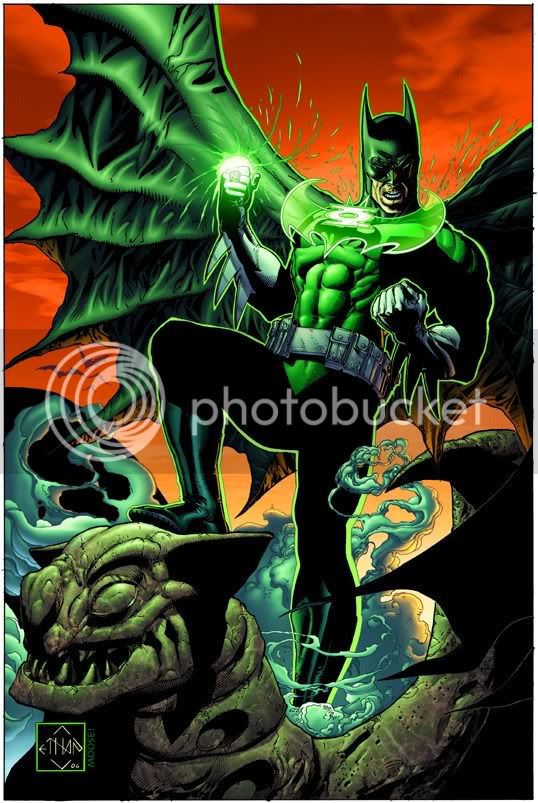 Im guessing Bats has to save Hal or something like that...

It won't last, that's for sure.

Saw these yesterday, They look fuggin' sweet. Except for the 11 Batman titles.

Batman Year 1000 sounds like a honk of steaming filth.