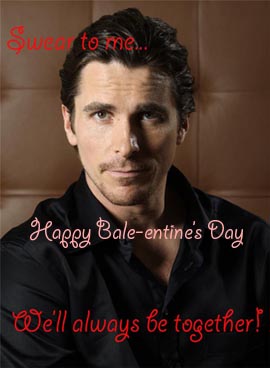 Jim Gibbons said:
After “The Dark Knight” came out, many among the crew at Wizard HQ back in 2008 were constantly quoting some of the more hilarious lines from “Batman Begins” and “TDK.” While both those movies are extremely enjoyable, Christian Bale’s gruff Batman growl is just too funny not to endlessly mimic. Frequently, during meetings or random conversations, people would growl “Where is she?!” or “Swear to me!” instead of using normal human dialogue.

Safe to say, this made for a pretty fun time around the office.

At some point, I was struck by the idea that these silly quotes (if read in gruff Batman inflection) would make hilarious Valentine’s Day cards when matched with dreamy photos of Christian Bale. At some point, these were dubbed Bale-entines (I believe by Marvel’s Alex Kropinak), and for a solid week they were the funniest things ever.

As we’re oh-so close to Valentine’s Day, let’s see if we can recapture the magic by posting those jolly old Bale-entines! Please, enjoy!
Click to expand...

Morgan Freeman's heartbroken resignation one is my fav.