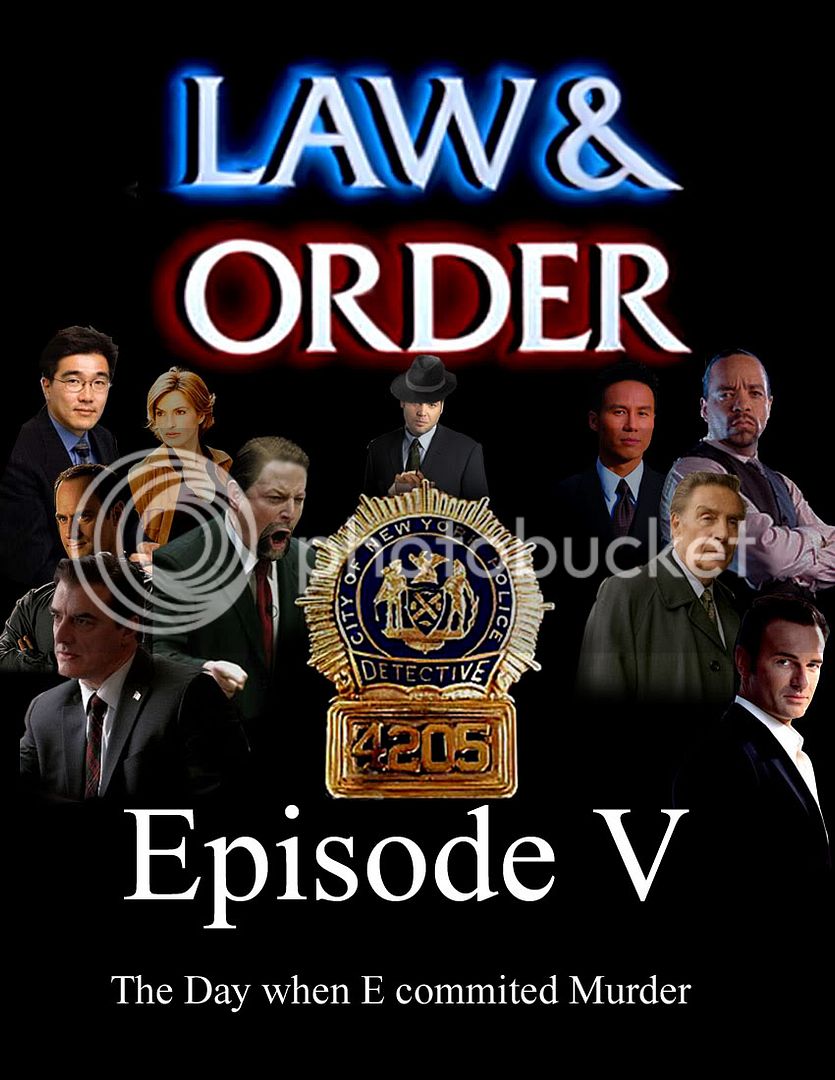 I can't believe I'm not Vincent D'Onofrio though. :cry:

I can't believe I'm not Vincent D'Onofrio though. :cry:
Click to expand...

Dude I hate that guy on Law and Order, annoys the **** out of me, which matches nicely up with who his counterpart is.

Ultimate Houde said:
All I have to say is, look at the title, and look at the new guy on the poster.
Click to expand...

Maybe we should give a cookie to the guy who guesses it correctly?

I can't believe I'm not Vincent D'Onofrio though. :cry:
Click to expand...

I think he's going to be Ultimate Gambit

Or maybe Ultimate Gambit can be Monk...

A courtroom is a bustle of activity today. Various reporters line the rows, and our favorite 82nd precinct cops are in the back, some standing, leaning against the wall, others sitting in the row. Everyone seems to be expectant.

Houde: I'm starving
Bass: Stop thinking about your stomach for once.
Houde: It's so hard too.
Skotti: Keep eating like you do, and you'll get a belly.
Compound: Me no happy
Ourchair: It's okay old chum, things will work out, they always do.
Nurhachi: Still though, it's so odd that he would do this. I mean he's always yelling and everything, but to actually murder someone?
Orson Scott Card: He always told me that he would cover up the murder when he killed me.
Hawkeye101: Ya, me too.
MWoF: That's cause you guys are idiots.

The doors open, and Ice runs in.

Bass: How's Nigma?
Ice: Nigma is fine, Ultimate Gambit is over there watching him, have they reached a verdict yet?
Bass: No, Goodwill is about to finish up though, he's interviewing E right now.
MWoF: You know, if we are all in here, whose out there arresting the criminals?

Slimjim felt he was taking candy from a baby

That's because he was.

The baby screamed as he hopped the fence, and sucked on the lollipop the kid had.

A breeze came past him.

He speed off, holding the lolli.

Up in the front, goodwill walked over to E, who sat in the booth. E's lawyer, Cad, was biting his fingernails. The judge, DJF, was dressed in camping gear, and didn't even look amused. The jury consisted of two individuals, the Captain and JTG.

DJF: Get on with this!
Goodwill: E, did you murder GMaster?
E: GMonkey? Nope.
Goodwill, Hypothetically, let's say you did. If you did, how would you have done it.
E: Well, I didn't
Goodwill: Work with my Police Chief E.
E: Well, first I would have totured him...
Goodwill: Yes, you did torture poor innocent GMaster for writing those slanderings about you, didn't you?
E: What, no...

Goodwill holds up a tape. He hits the play button. The voice of GMaster is heard.

GMaster: E! What are you doing! PUt done that biully club E! OH E STOP HITTING AND TORTURING ME!

E: Well played prosecutor.
DJF: I bore of this case, jury what do you think?

Suddenly the doors bust open, and two people stand there. Ultimate Gambit, the best crime scene investigator the 82nd precinct has, and Nigma, a rookie cop. Nigma is leaning on Ultimate Gambit.

Ultimate Gambit: WAIT! I HAVE EVIDENCE THAT WILL CLEAR HIM!

I love the Slimjim bit.

It was another boring day in the precinct, not much going on other than the normal coverup or two. A sunbeam was on Houde's desk, and his head was in it as he snored peacefully, mumbling about random things in his sleep. Bass was drinking the latest drink fad, reveling in his coolness, ruffling papers ever now and then.

It was too peaceful, even Hawkeye101 and Orson hadn't screwed up in the past month. That should have been a clue.

A reporter sauntered into the police station like he owned it. He was dressed in a ratty old sport coat, and had a hat, with a piece of paper in it. He waltzed over to Skotti's desk.

Reporter: Hey there babe, your..hehe..police chief in today?
Skotti: Did you just call me babe?
Reporter: Be and doll and ge him for me, would ya?
Skotti: Um....doll?
Reporter: Thanks sugar, and get me a coffee as well.

The reporter walked off, and pulled out a measuring tape, and started to measure random things. He waltzed closer to Houde and Bass' desks.

Reporter: Yea, the tub can go over here.
Houde: Mommy, do I need to wear my special underwear today?
Reporter: And, this is where the four person shower can go.

The measuring tape slapped across Houde's desk, and hit Houde on the nose. He yelped.

Houde: YELP!
Reporter: You should get out of my bathroom.
Houde: Who the hell are you?
Reporter: GMaster, and soon I'm gonna own all your asses. You see this.

He holds up a tape recorder.

GMaster: I'm gonna use this to send your boss to jail, and then, I'll buy the place.
Houde: That makes no sense.
Bass: And yet, knowing us, wouldn't fail.
Houde: Anyways, I'm hungry, you want something?
Bass: Sure, let's get some Thai.
Houde: I hate Thai food.
GMaster: Did you guys hear me? I'm taking over this place.
Houde: You think your the first one to come waltzing in here thinking you have our boss by the nose hairs?
Bass: Did they find the other one?
Houde: Nope, the chicken wire worked quite nicely.
Bass: Oh, good.

The both turn smilingly at GMaster.

After the Thai food

Houde and Bass walked into the chaos that reinged in the precinct.

Houde: Nur, what the hell happened?
Nurhachi: I have no clue, E went nuts and shot the reporter guy, in his office. The guy stumbled out, bleeding all over hismelf, and died.
Houde: Oh crap!
Last edited: Mar 2, 2006

I like the Rashomon POV feel to this issue.

I love Bass' fancy words which mean something much more simplistic.

And I apologize for the smaller segments, the larger ones were burning me out, so I decided on more segments that are smaller. I'm still undecided on whether or not I like the format of that.

There are types of stories where previous action is told multiple times from different points of view.

The Japanese film, "Rashomon" was the first film to do it with such skill and also was popular in America at the time.

So you're having flashbacks, but it looks to me like each flashback is from a different POV, filling in the pieces like a jigsaw, hence the connection to Rashomon.

Again, Bass makes me out to be smarter than I really am

Ultimate Houde said:
Again, Bass makes me out to be smarter than I really am

I love it when people do that to me, makes me feel good

:lol: I wonder how E'll get out of this.

Ultimate Houde said:
And I apologize for the smaller segments, the larger ones were burning me out, so I decided on more segments that are smaller. I'm still undecided on whether or not I like the format of that.
Click to expand...