I picked up a comic a few months ago called Lullaby: The wisdom Seeker. It dealt with the adventures of Pinnochio, Pied Piper, Jack from Treasure Island, Alice in Wonderland and Little Red Riding Hood.

The comic was very well drawn, and interesting enough for me to remember to pick up the paper back when it comes out.

I have yet to even see and issue in stores again. Does anyone know what happened?

I foudn the guy who draws it art page

HE has some pretty cool pics

I see more a FF (Final Fantasy not Fantastic Four!) feel. But it looks great. I like it!

He does have an FF feel

At least I finally found out what happened, the second issue came out two months after the first. They rushed to put it on shelves.

the TPB is out in August

Just looked at the preview earlier, and now Im gonna be ordering this today. Cant wait to get it in my hands.

Art looks great. Although I think making a comparison to Fables, Final Fantasy or Kingdom Hearts is hardly fair, since those products have derived their idea of a shared fantasy universe from many other mythologies before them.

Looks more like the kind of anime series cooperatively designed with merchandisers, if you ask me. Not that that implies capitalist whoredom --- just par for the course in anime.

ourchair said:
Art looks great. Although I think making a comparison to Fables, Final Fantasy or Kingdom Hearts is hardly fair, since those products have derived their idea of a shared fantasy universe from many other mythologies before them.
Click to expand...

The art resembles that of Final Fantasy. How is that "hardly fair"? 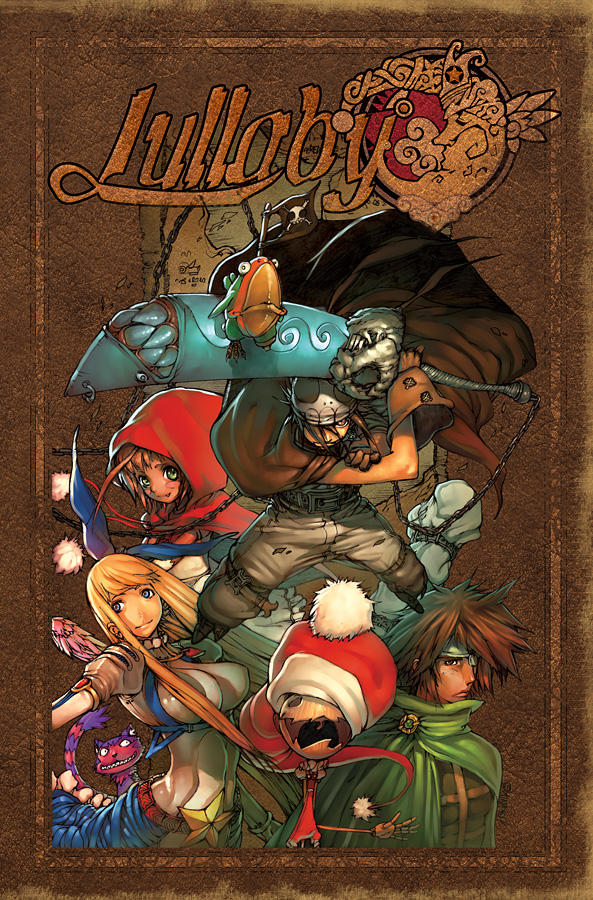 So I have read the last three issues, and here's my review of them.

My first thought is how well the coloring in this book is and how it brings the gorgoues art to another level. The story here is your basic one, with a general intorduction of the six main characters from the previous trade, Lullaby: the Wisdom Seeker. They seem to be searching for a way to finally defeat the evil that is spreading through their world. The six characters are Alice, who is from another world and is the Queen of Heart's greatest knight. Pinnochio, a puppet who is connected ot the world tree Yggidrasil, and has power over plants and flowers. Pied Piper, someone who is also from another world, and is hinted at being from the ssame one as Alice, and plays the pipe to attract animals to himself. He also has a huge thing strapped to his back. Red Riding Hood, who is part wolf, part child. And finally Jim Hawkins, who has a magical sword and a talking parrot that says only Crew and Help. Anyways, they find out someone isfollowing them, and they go and investigate. It is a red haired maiden who wields three swords. She attacks Alice, meanwhile Pinnochio wanders off to help a flower grow, and gets eaten by a bag. The fox who holds the bag gains hi powers.

The fight between Alice and the maiden ends prematurely. Jim falls for the maiden while Red gets eaten by the fox. Alice and Piper fight the fox, only to have him destroy them both, eventually eating them as well,. The Fox mentions how he isn't given this power to the Wizard, instead keeping it for himself. He is holding a sword which is strangely like the swords that the Madien uses. She confesses to Jack about what she does, steals weapons, and says if she and Jack combine powers thye may have a chances. Jack succmbs after she kisses him, and then she shows up, challenging the fox.

The fox and madien fights, but it is obvious the fox has the upper hand. He quickly gets the madien in a pickle, when you find out what she really does. She combines the swords with their wielders, and Spirit Jack emerges from his sword and breaks free. The fight begins anew.

MEanwhile, in the bag, th ePiper plays his flute, attracting not only the Tortoise and the Hare, but Baga Yaba, and her house. Inside the house is Pinnochio, who is in pain everytime the Fox uses his powers. Piper plays the flute and sttracts everyone to the same spot in the bag. Alice arrives, and asks how Piper knows that particular song. They touch hands...

The fox has beaten the Maiden. He goes to eat her when the Wizard shows up. Forget about illusions and curtains, this guys kicks and looks insanely evil. He take son the fox who refuses to give up the powers. They begin to battle, when the bag begins to glow, and the final panel is it exploding.

Overall, the story seems a tad rushed, the art is beautiful and very much manga influenced. You may want to wait for trades, as thsi comes out infrequently, and spaced months apart.
Last edited: May 22, 2006

The fellowship has gathered and is on their way to Oz at last. Almost instantly, they are sidetracked by a beautiful French swordswoman bearing the swords of the famed Three Musketeers! Is she friend or foe? Just as they are about to find out, a powerful and wily fox named Makoma starts kidnapping them one-by-one and stealing their powers... Join the Pied Piper, Alice from Wonderland, Pinocchio, Jim Hawkins and Little Red Riding Hood as they are forced into battle with 'Thee Great One' in this second volume of the fan-favorite series, Lullaby

This is the book description by Amazon, I'd figure TGO would like the review, though I knwo not why....
You must log in or register to reply here.