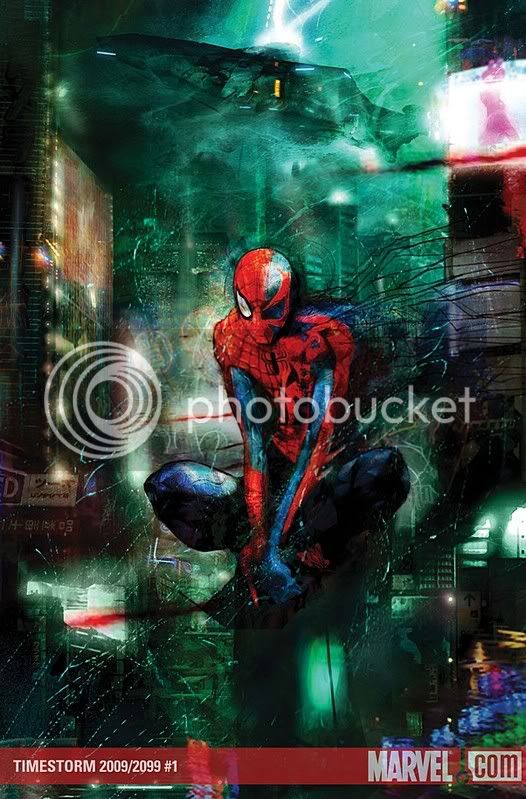 Written by BRIAN REED
Penciled by ERIC BATTLE
Cover by CHRISTOPHER SHY
2009...meets 2099? Future history has been shattered by events in the present! If you think you know the heroes and villains from Marvel’s dark future, writer Brian Reed (SECRET INVASION: CAPTAIN MARVEL) and artist Eric Battle (Batman) say it’s time to think again! Get ready for the re-imagined 2099 versions of Spider-Man, Ghost Rider, the X-Men and more! Plus 8 pages of Director's Cut Extras!
Click to expand...

Excelsior Club
I really liked Spider-Man 2099; the rest I didn't care for. So...meh.

I wonder if they'll have mutant 2099 with his partner Reed Richards' brain in The Thing's body.

Same here, I thought it was a really well done comic with that kind of premise

Iceshadow said:
I wonder if they'll have mutant 2099 with his partner Reed Richards' brain in The Thing's body.
Click to expand...

That's actually a different 2099, you can thank Kirkman for that one.

What about Doom 2099? President Doom was cool.

I really really like that cover. Is the interior artist the same?

They don't need to bring back all of 2099......but I'm still adamant about Marvel continuing from their series of one-shots by Kirkman.

Particularly the Daredevil 2099 and Punisher 2099.

Nice! I'll get the spider-man 2099 if this is a a complete restart so I can enjoy the series from the start again. i loved the old Spider-man 2099 but only read a few of the first issues then stopped getting it.

Brian Reed: Bringing the Timestorm to 2009