Osborn # 1
The Story: BIG TIME HITS SPIDER-MAN'S GREATEST ENEMY! The world's most dangerous felon is in the world's top supermax-security prison -- an institution so secret even the vice president doesn't know it exists. But can any cell contain Norman Osborn? After the events of SIEGE, the former Green Goblin, Iron Patriot and power-mad director of worldwide security isn't allowed to have a toothbrush...and he's surrounded by the deadliest criminals in the world. Lucky for Osborn, they're fans. Rising stars Kelly Sue DeConnick (SIF) and Emma Rios (AMAZING SPIDER-MAN) throw Osborn in the darkest hole the public's never seen! Featuring an all-new bonus story written by Warren Ellis (THUNDERBOLTS)! Rated T $3.99 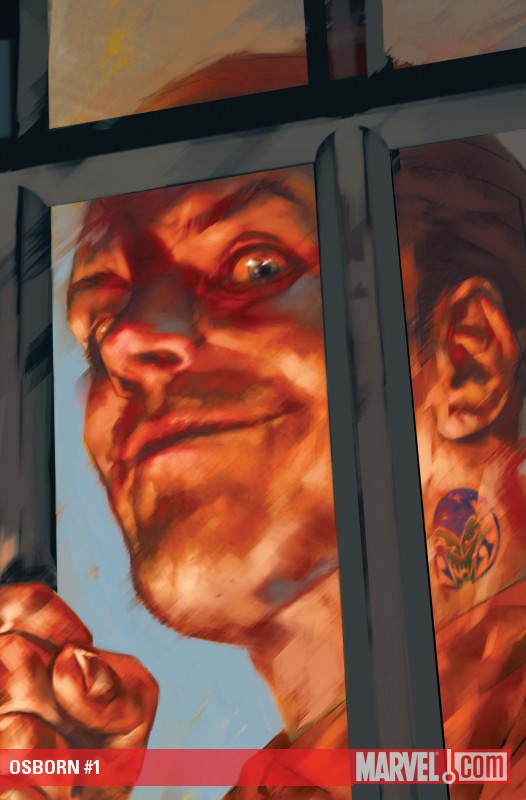 There's also a rather long article about the series on Marvel.com

"Norman was first held at the Raft, but quickly transferred to this secret, privately-run containment center," says DeConnick. "The prisoners he's locked down with here are super-secret; this is where the worst of the worst are kept. These criminals are a danger to everyone on the planet, and particularly our country."

This prison, dubbed the FCC Special Containment Center, holds within its walls global threats so dire that the government never let the world know, and they've never even been seen before.

"In Osborn's wing there is also June Covington, our mad scientist icon," DeConnick explains. "Then there's Zirdal, who is a big momma alien, like a mama bear. She's actually the one who is the most empathic of the group, even if she thinks the human species are a threat to her race and that's why humans have to die."

DeConnick also described another inmate as a demon with the ability to change people's memories, but with a nasty side-effect of making those victims bitter and angry. Rounding out the group in Osborn's wing will be a Peruvian jaguar god nicknamed "The Decapitator," and the writer applauded series' artist Emma Rios depiction of him as "fantastic and creepy, with giant teeth I adore."
Click to expand...

"There are things coming directly from ["American Son"], especially the Nora Winters part, which feeds directly into our story. OSBORN is almost as much Nora's story as it is Norman's."
Click to expand...

Nice, I love Emma Rios' art, and from what I've read of DeConnick's work I've liked.

While not a big fan of the Spidey-verse, I may pick this up. The concept looks really intriguing, plus Emma Rio's art is a bonus.

Excelsior Club
I'll check it out. Hopefully they can fix the character Norman Osbourn, although what has been done with him has been so outrageous it wouldn't surprise me if he's been irreparably ruined.
You must log in or register to reply here.
Share:
Reddit Pinterest Tumblr WhatsApp Email Share Link