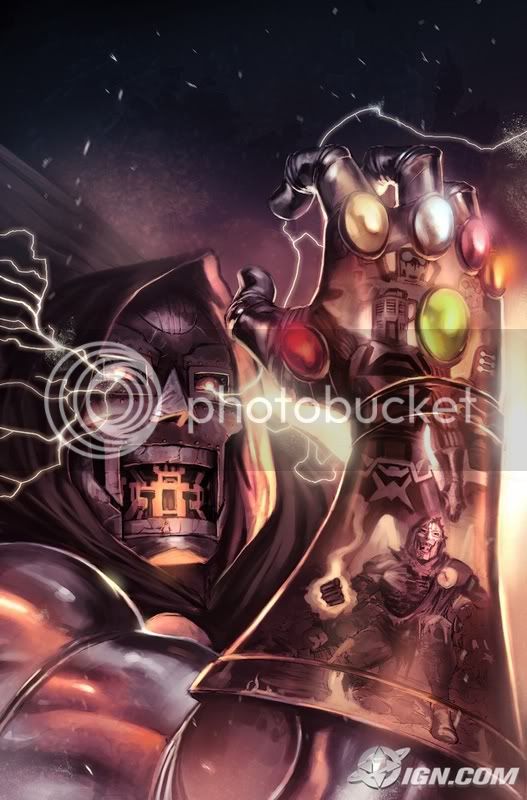 nice. I woner what the Celestials have to say about this.

And when I get home, that will be my desktop background. :drooling:

You can see a second Doom in the gauntlet's reflection.

You can see a second Doom in the gauntlet's reflection.
Click to expand...

But it kinda looks like he's going to battle with the celestials.

Is that a War of Kings image?

Look more closely and you see mangled heroes in the gauntlet.

That Doom image looks like him from Secret War.
Last edited: Sep 8, 2008

:roll: I'll look better when a zombie variant is released

I wonder who will be writing this.


Also, what's the link to this on IGN? What do they say (if anything) about the image?

Unless this is some kind of flashback, it's stupid.

After the Infinity Gauntlet miniseries from years ago, no one should ever touch that thing with a ten foot pole.

Zombipanda said:
Is that a War of Kings image?
Click to expand...

I don't think so, I imagine it's part of this Illuminaughty thing

only if you start jogging

ProjectX2 said:
Is this the big event that's been hinted at for 2009?

I wouldn't doubt it, and yes they are, whatever happened to just telling a good story in one book, Silent War was a far better and more impactful book than WWH, and it managed to contain itself to one-title

Ice said:
I wonder who will be writing this.


Also, what's the link to this on IGN? What do they say (if anything) about the image?
Click to expand...

They don't know anymore than we do, apparently it just popped up in there mailbox

At IGN Comics we're always on the prowl for the latest and greatest art, especially pieces that seem to indicate huge things for future comic book storylines. (Sometimes that isn't always the case, but hey, great art is great art.) This time we have one that seems to answer one of the bigger questions related to Marvel's Illuminati mini-series: What has become of the Infinity Gems?

The Marvel Universe is full of beings possessing overwhelming power, but none of their abilities can stand next to the Infinity Gems and the gauntlet that can unify them. Named Time, Space, Mind, Soul, Reality and Power for the aspects of the universe they can control, these gems have been the source of cosmic power struggles in the past... and now it appears Victor Von Doom might have discovered their hidden locations.

During the New Avengers: Illuminati limited series by Brian Bendis and Jimmy Cheung, the Illuminati gained possession of all six gems. Determined to prevent abuse of the artifacts, each of the members (Charles Xavier, Tony Stark, Reed Richards, Namor and Dr. Strange) was given one of the gems for safekeeping. It looks as though Doom might have found a way to locate the gems, and he now will have the power he has desired for so long.

Marvel sent us this cover, which is done by prolific cover artist Marko Djurdjevic. We don't know what series or storyline this is for, though the presence of the Eternals does lead us to believe this could belong to the current ongoing series. It could be for something much bigger. Time will tell. All we know is this art kicks *** - and we hope the storyline lives up to the cover.

Will Doom have his reign of terror?

Indeed they are Celestials.

Ice said:
Indeed they are Celestials.
Click to expand...