I looked for a while, but I couldn't find a thread for this. I really thought there was one, 'cuz I can remember us discussing it for a while... Hmm.


Anyway, there've been four trailers now, I think, and almost every one of them have been posted here.

Today the new Restricted teaser came out. It's grainy You-Tube if you're under 18 (at least until I can find a better link) but you can view it here.

This movie is going to own.

I just read the actual poem, and the movie seems to be nothing like it. My English teacher and I both believe that the movie is going to suck.

I like the legend, and last year's Beowulf and Grendel was cool.

Lithium said:
I just read the actual poem, and the movie seems to be nothing like it. My English teacher and I both believe that the movie is going to suck.
Click to expand...

I am verily excited for this.

I've read it a dozen times, what do you think is going to be so different?

Dr.Strangefate said:
I've read it a dozen times, what do you think is going to be so different?
Click to expand...

Well, for one thing, Beowulf is an Epic. Epics are traditionally generic tales of Good vs. Evil. How many movie's do you want to see with no story behind them whatsoever?

Also, the writer's openly admitted they are adding pats to the movie that were not part of the poem, which i disagree with. (The link to this can be found Here.)

Grendel is not a character meant to have a backstory, he is just a generic villain. From what I've heard, in the movie he will be the illegitimate child of Hrothgar and his mother. This is simply not true to the story at all.

Another complaint I have is about the casting and representation of Grendel's mother. Grendel's mother is meant to be a repulsive, ugly witch. Angelina Jolie is not ugly, and not repulsive n any way.

This is the first I've heard of this movie.

And I agree with TOG about the owning.

The screenplay was written by Gaiman. That's all I need.

Didn't anybody here me?

Debate over! The movie will be awesome! Lock the thread!

Planet-man said:
Didn't anybody here me?

Debate over! The movie will be awesome! Lock the thread!
Click to expand...

I don't like him. Sometimes you can be too weird.

So I just got back from seeing Beowulf.


Technically speaking....there is no way they could've done this film live action. So the photo-capture CGI was perfect for it. And the fact that all the characters looked like their real life counterparts helped immensly with keeping you hooked into the whole movie and not focusing on the fact that this is merely CGI.

Because lets be honest..... 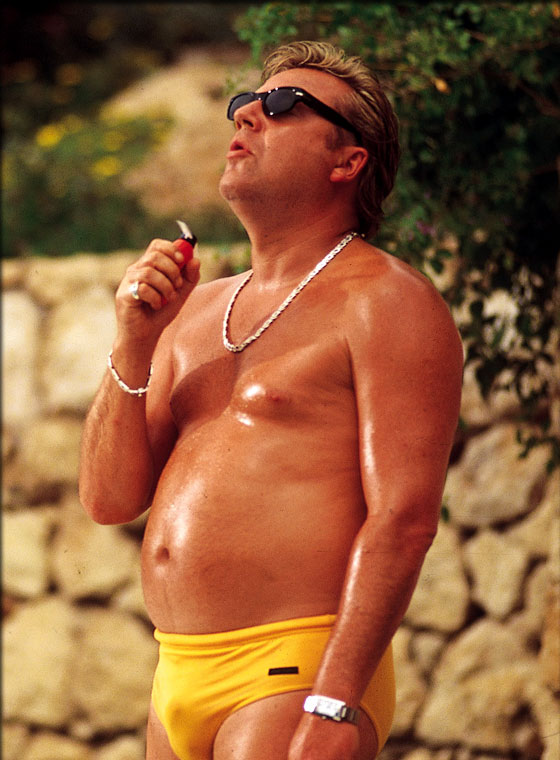 Because that's who played him.


As far as the film and story itself goes, it was pretty cool. Gaiman's "Stardust" was more entertaining.....but this was pretty good as well.

The film actually hilarious to me because Beowulf loves.....lemme say that again---LOVES saying his own name. After the 27th time he shouted his name I stopped counting. It was like he had turrets or something.

"Beowulf tell us about the time you slayed that ogre from Hroth."

"Beowulf would you like cheese on your fries or care to supersize your combo today?"


It just didn't stop. Plus he had an affinity for fighting naked. It was kinda gay.


All in all....it was an enjoyable movie. I'd add it to my DVD collection.....but only after it goes in the Used Bin at Blockbuster.


And seeing how well this CGI worked should be proof enough to anyone on why the Justice League movie NEEDS to be done the same way.


PS---although they tease nudity all thru the film....at the very end when Angelina Jolie is in the water....they tease it with "could it be shadow or couldn't be shadow?" controversy.....but they totally added a digital nipple to her. And they showed it like 3 times. If you weren't looking for it, you'd miss it.

Just got back from the film.
Overall, I enjoyed it immensely. The landscapes were incredible, the digitized men were all wonderful feats of CGI, and the battles were epic. I will definately add this to my DVD collection.
But the only gripe I have, the only one that truly truly annoyed me was the nudity. In the opposite direction of VVD, I was solely angered whenever they constructed gags to cover up nudity. While the gay jokes can be tossed around willy nilly it truly angered me that in a movie with this many abhorrent images, a penis was deemed too much. I was hoping that maybe, just maybe the animation department would have the cajones to actually animate a dick or nipple. I was wrong. And it ticked me off. Rant over.

I was going to see this because I like Zemeckis (BACK TO THE FUTURE, BABY!) and Beowulf.

Then I saw the trailer.

I think the CGI is ****ing piss poor. It looks like a FMV from a video game. Like FINAL FANTASY or A SCANNER DARKLY, the CGI is pseudo-realistic which makes it more jarring when it's not quite right. So much so, I continually am reminded I'm watching a film.

I much prefer the CGI animation in Pixar's films.

So no. I'm not watching this film. To me, it looks like a half-baked film. Neither animation nor live-action, and not a marriage of the two like WHO FRAMED ROGER RABBIT. So **** it. :|

I just think the film won't be that good, and plus, I know the ending.

The best version of that story is the Thirteenth Warrior starring Antonio Banderas. Beowulf needs a new adventure, his lore is ripe with possibilities. He could be involved in an adventure in the 'New world' or something like that.

I'm sick of this story.

Ultimate Houde said:
The best version of that story is the Thirteenth Warrior starring Antonio Banderas.
Click to expand...

The problem I have is that I liked last year's Beowulf and Grendel, the point of which was to create as true-to-life and realistic version of what probably actually happened. It succeeded, and so I think I'm gonna have a hard time trying to take this seriously.

It's like listening to someone tell a ridiculously exaggerated account of an event that you were actually there for.


Yeah, it was by far the most intense movie-going experience of my life, what with the blood and guts flying at your face every other second.

You haven't really seen Beowulf until you've seen it in 3-D.

In fact, it should have been released only in 3-D. Srsly.

Beowulf: B+, and I'll be updating my movie list shortly...

I Am Beowulf! This Is Sparta! You Can Dance If You Want To!

Victor Von Doom said:
I Am Beowulf! This Is Sparta! You Can Dance If You Want To!
Click to expand...