If the Tomorrowverse is ever linked, meaning established as being the timeline created after Apokolips War, I think it makes more sense to list it separately. Similar to this, but in timeline form.

Instead of doing [Timeline] throughout the whole thing, basically list it so that it shows the entirety of each "verse".

I think that makes more sense than shoehorning two very different universes into the same timeline.

Also, I changed some things regarding every movie from Suicide Squad: Hell to Pay to Wonder Woman: Bloodlines. It makes Amanda Waller dying of cancer during the 2 year time jump in Apokolips War more believable.
Last edited: Aug 16, 2022

Might as well include DC Showcase: Sgt. Rock and DC Showcase: Death as DCAMU. This is the closest we're gonna get to official word.

Also, Constantine: City of Demons moved to 2017. The prop date is annoying, but it's allegedly a prequel and it doesn't undermine the John/Zatanna relationship that way.

Pro Bot said:
Also, Constantine: City of Demons moved to 2017. The prop date is annoying, but it's allegedly a prequel and it doesn't undermine the John/Zatanna relationship that way.
Click to expand...

However, John and Zatanna never technically officially started a relationship in Justice League Dark to be fair. John got drinks with her and that was it. Theoretically they might have never gotten together until, say, mid-November 2018

It's such a gray area but the only sure comment we have is that it's a prequel. I'm not picky though, I can take either option. Prop dates are the easiest to retcon when contradicted with something else, not that you should ignore them.
Last edited: Aug 17, 2022
I

Found a small mistake here
I

ItzStitch626 said:
Sorry to bother you but I can’t find the video only timestamp for this
Click to expand...

It's no bother, and I appreciate it. 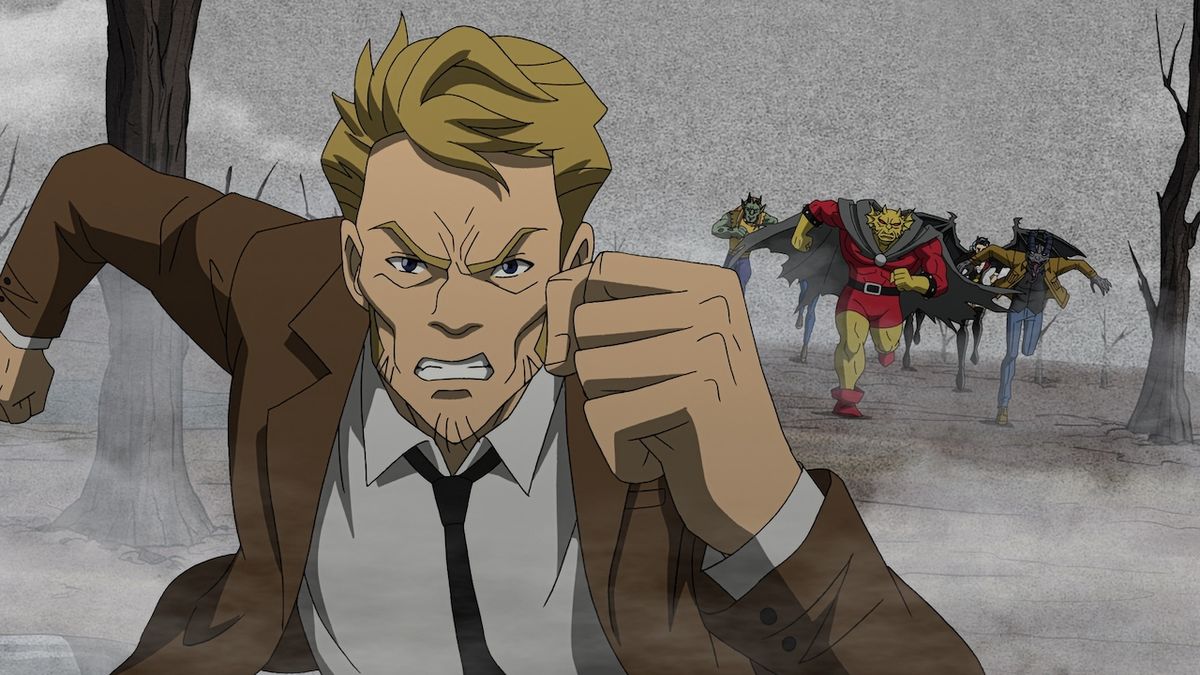 Constantine: The House of Mystery served as an epilogue to the DC Animated Movie Universe.

www.cinemablend.com
"Well, those ideas were discussed when I was doing the finale to Apokolips War. As far as I'm concerned, my continuity is closed off. That door is shut. So whatever they do, I don't own the characters, so I'm like, 'Ok, that's cool.' In fact, when I was doing Apokolips War, I was going to do an ending that would have been a more overt handoff. So you'd have known at the end of Apokolips War that there was going to be another continuity created. But there was back and forth, and it was decided that it was best just to leave the ending as it was, as you saw it, and let the next people decide to use it or not use it. So they used it, in a way. When I'm not involved with something, I'm kind of impassive to it, so I'm like, 'Ok, that happened.' Also, I love The Spectre, I wish I'd gotten to use The Spectre in my set of movies."

That's the closest we've got to the Tomorrowverse being confirmed as the new timeline, which it doesn’t technically confirm outright but I think it's enough.

Essentially, Justice League Dark: Apokolips War's ending was meant to tease that a new continuity would be started, and it was going to be more overt, but they decided that it was better off leaving it as it was, and they could choose to either use or ignore it for their new universe.

"And at that moment, that very infinitesimal split second before death, I drew the Speed Force into me with every ounce of willpower I had left. And literally bought time. I expanded my moment of dying into days, maybe weeks...but it's like operating in a fog."

Suicide Squad: Hell to Pay should be days, maybe weeks after Justice League: The Flashpoint Paradox. Logically that puts it in November-December 2017, because the present day of the Flashpoint timeline was November. To reduce the time Waller dies to her cancer, I suppose December would be best (13 months - she was told she had 6 months to live). Then again, Barry returned to the present one month earlier, so maybe Zoom ended up a few months into the future. Hm...

I'm assuming Zoom ended up in the future.

I was curious and this is just for fun by the way, but I'm pretty sure The Dark Knight Returns timeline goes like this.

That's because of Ronald Reagan. The Dark Knight Returns comic released in 1986 as well, so there's that. Unless Reagan was somehow president for decades? This is based on Bruce being 55 in The Dark Knight Returns and 25-26 in Batman: Year One. He becomes Batman at 26. Technology difference isn't really a problem since this is the DC Universe. Of course, if there's a prop date I'm missing then I guess that would rank above.

Thought this was notable. Superman vs The Elite uses the same theme music from Superman: Doomsday but is considered a different continuity. Basically all DC animated movies are separate universes except the DCAMU, Tomorrowverse, TDKR, Justice League Duology and Batman/Superman Duology. Injustice and Kamandi also use that theme.
Last edited: Aug 22, 2022

Thought this was notable. Superman vs The Elite uses the same theme music from Superman: Doomsday but is considered a different continuity. Basically all DC animated movies are separate universes except the DCAMU, Tomorrowverse, TDKR, Justice League Duology and Batman/Superman Duology. Injustice and Kamandi also use that theme.
Click to expand...

I actually made a head-canon viewing order of my own for all of the DTVs to create a pretty cool universe. Check it out.

Where was it confirmed that DC Showcase: Death is canon?

The writer of the short "assumes" that it part of the universe. Nothing concrete, but it does have the same artstyle. He assumes this for Adam Strange as well, which he also wrote, but that's since been confirmed as a different continuity (or a different timeline if you believe they're connected). But don't quote him, heh. Sgt. Rock is the same situation, although he didn't write it so it's not as solid (granted, it's all flimsy).

This wouldn't be the first time a short film was tied into a universe.

DC Showcase: Catwoman was included in the Batman: Year One blu-ray. Part of The Dark Knight Returns Universe.

I think Adam Strange is actually set directly before his appearance in Beware My Power. He's wearing the same suit that he wore in that movie and he likely spent many years on that mining planet.

Sad that he never got to see his daughter though.

Yo, found an error.
That being said, this is a pretty bomb list!

Kamandi is confirmed canon to the Tomorrowverse. Presumably Kamandi is the prisoner who gave Earth-2 Clark the Superman suit, which he got at the end of his own short. Doctor Fate likely transported him from Earth-AD into Earth-2.

"A lot" connects to the Tomorrowverse, but he can't say. My guesses are Crisis or DCAMU John crossing into the new timeline.
Last edited: Aug 23, 2022

Look, I had to ask. The artstyle is similar. Don't judge me.
We'll see who's laughing when "Blue Beatle!" is in the next movie, hahaha