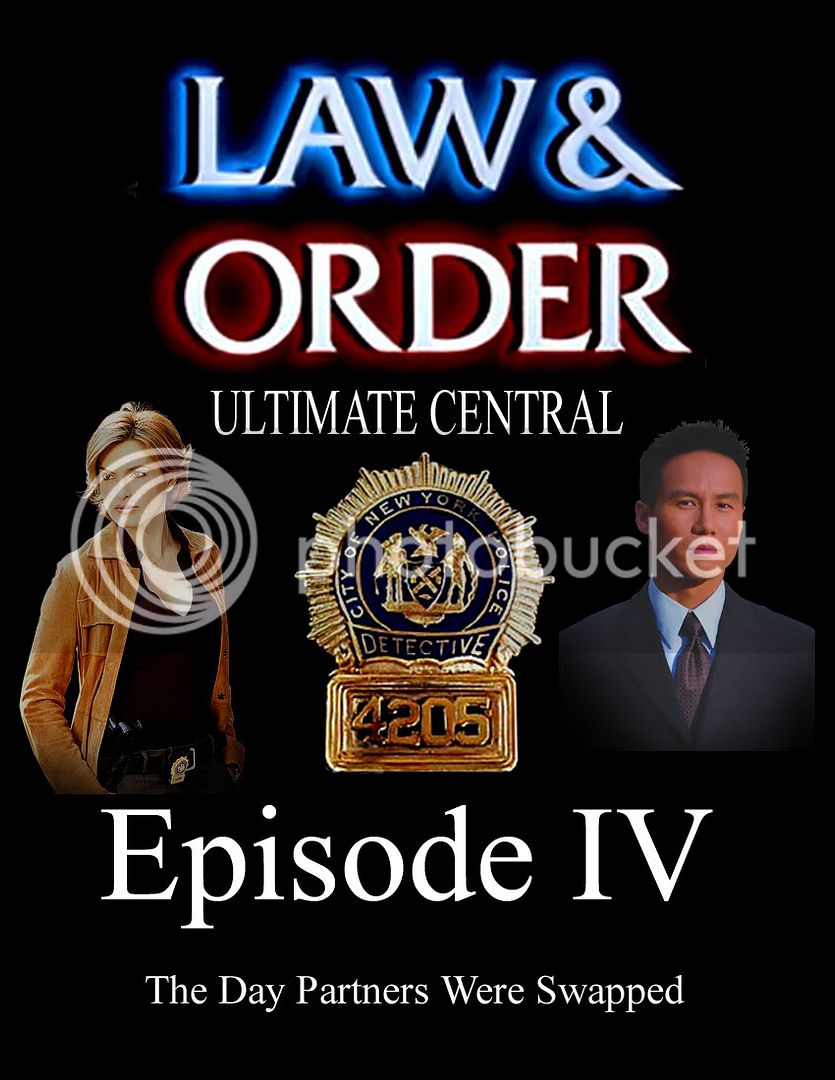 (Cover is Skotti and OurChair)

The day has come, when once every year, E sticks it to his subordinates. It's the day where everyone's name goes into a hat, and E pulls them out one by one, and they get stuck together as partners. Will Nigma finally have a cool partner other than Ice? WHo will Bass get stuck with this year? Nurhachi? MWoF? And who gets the two losers of the precinct Hawkeye101 and Orson Scott Card? Why did Houde call in sick today?

Politicians are dying across town, and E is forced to take Baxter, the mayor of New York, into custody to make sure he isn't next.

Skotti leaves work for the day to investigate some drug related deaths in her old stomping grounds. Joining up with SlimJim (who is pissed someone is creeping on his terriotory) and a mysterious helper, she tracks down the elusive Ultimate Quicksilver.

Cad takes his elite skills back into courtroom as he goes against his rival, Goodwill. Cad's friend, Doc Comic has taken a law suit out on Roguefan, and Cad is there to make sure the Doc gets his money. But when Goodwill steps in, this case becomes less about the actual case, and more personal.
Last edited: Jan 3, 2006

Wow! I'm being written into something!

when you gonna hook a brotha up so i can get into it "ma brotha from anotha motha"?

He probably stole your pot or something.

I hope I get 'partnered' up with Famke Janssen.

The 82nd precinct was a hustle and bustle of activity today. The entire roster was in the lobby, looking up at a box that stood on a pedestal. The box contained everyone's name, and when E shows up, people will be partnered for the day with these people. Everyone was worried, except for Bass. As he showed up, he was assaulted with questions.

OurChair: Bass, you made it, you scared man?
Bass: Scared of what?
Nurhachi: Of being teamed with Hawkeye, or Orson Scott Card.
Bass: Not really. For the past eight years I worked here, I always got partnered up with Houde on this day.
MWoF: You didn't hear?
Bass: Hear what?
MWoF: Houde called in sick today. He got food poisoning from some chinese food last night.
Bass: I told him not to get food there, that dumbass.
~~~
Flashback
Last Night

Houde: I'm going to try out this new joint over here.
Bass: The, Oh My Gawd, This Killed My Stomach place over there.
Houde: Yeah, why?
Bass: Don't eat there man.
Houde: Why not?
Bass: Look at the name.
Houde: Whatever, I don't care. Want anything?
Bass: No...
~~~

MWoF: Yeah, that was kinda stupid.

The bustle settled over the crowd, and Bass turned to look at E as he walked in.

Seeing how everyone was already quiet, this called some people to look around and wonder what was going on.

Cad was enjoying the day, he didn't have to go visit the 82nd at all today, and he was going to enjoy a nice relaxing day.

Then he got a call from his friend, Doc Comic.

Cad: Doc? What's the matter.
Doc Comic: I need to sue someone, and I need the best.
Cad: No problem, come to my downtown office.
Doc Comic: Alrighty.

Minutes later, a harassed looking Doc Comic showed up, throwing a piece of paper at Cad.

He paces the room.

Silence reigned for a few minutes.

Cad: That son of a motherless goat is going down.
Doc Comic: Oh thank you!
~~~

Back at the police Station

He dipped his hand into the box and pulled out a name.

The hand goes in again.

And so it went forth like this for an hour.

Manwithoutfear got teamed with Orson Scott Card, and since E was feeling bad for him, he gave him another partner, which turned out to be Compound.

Nigma, excited at the prospect of getting a new partner, wound up with Ice instead. Ice called it fate, and vowed to play Justin all day. Nigma was thinking about quitting. And lastly, it came down to two people, Bass and Hawkeye101.

E: And Bass gets teamed up with Hawkeye101

Hawkeye101 walked over, and hugged Bass.

Bass: I hate you...
Hawkeye101: You think if I'm partnered with you, I get a real gun instead of this water pistol?
Bass: I hate you so much right now...

What's important, is that someone called Doc Comic "stupid". BUT WHO?!

Houde said:
Cad: That son of a motherless goat is going down.
Click to expand...

What's important, is that someone called Doc Comic "stupid". BUT WHO?!

Something tells me we will see the Fan Fic Revolution bought into Law and Order - and could it be me that called Doc Comic stupid?

Your *** is grass in the fanfic bub

Ultimate Houde said:
Your *** is grass in the fanfic bub
Click to expand...

Why does everyone hate me now?!

Because, your a grammar nazi

Ultimate Houde said:
He probably stole your pot or something.
Click to expand...

No way...if Doc Comic were an actual pothead, he'd be too lazy and unmotivated to even get off his couch, let alone undertake a lawsuit. I'm thinking the guy not only called him stupid, but stole his extensive Reba McEntire commemorative plate collection. Thats got to be it.


ProjectX2 said:
Why does everyone hate me now?!
Click to expand...

Because they're all my secret minions. And they're out for...your blood!!!


By the way Houde, another great job. Looking forward to the next part/chapter.
Last edited: Jan 4, 2006

I love ProjectX2, if only to be different.

Bass said:
I love ProjectX2, if only to be different.
Click to expand...