Here's what Gene [Roddenberry] said in an interview just before he died in August 1991; somebody had asked him, 'What's going to become of Star Trek in the future?' And he said that he hoped that some day some bright young thing would come along and do it again, bigger and better than he had ever done it. And he wished them well.
— Richard Arnold, Roddenberry's assistant​
JJ Abrams is that bright young thing.

As most of you know, I'm a big fan of JJ Abrams and Bad Robot productions. I love Alias, Lost, Fringe, Mission Impossible III and Cloverfield. And I've been excited for the Star Trek movie even though I've had no interest in the franchise before.

I honestly cannot think of any flaws at this moment. I am sure there are some but I am so impressed... so happy that it did not disappoint... I loved it. Very entertaining.

The cast was fantastic. Obviously I have no connection to the actors that portrayed these characters in the past but these guys brought the goods. Chris Pine is awesome and I would be very happy if he played Hal Jordan in the Green Lantern movie. Zachary Quinto... **** Sylar. He is now Spock. Uhura was pretty and actually had a name. Sulu was badass. Chekov was a pro video gamer. Urban as Bones was great too. And Pegg as Scotty was hilarious, of course. If there was a weak point in the cast, I think it would actually be Bana as Nero, strangely enough. While he is a good villain, he didn't really do much - in fact, I think his second in command may have had more dialogue.

Leonard Nimoy as old Spock was excellent as well.

This movie was also surprisingly funny. The plot is quite thin - it does it's job but it's not what the movie is about. This movie is about beginnings. The explanation of time travel and alternate universes proves it - this is no longer the Star Trek of the original series. It is a whole new start... the beginning of a new journey and one I will gladly be apart of.

The effects were insane. I can't believe in two weeks, I've seen two blockbuster movies - and the difference between the effects in Wolverine and Star Trek are crazy. This movie puts most blockbusters to shame.

I am glad that JJ Abrams, Alex Kurtzman and Roberto Orci did this movie - it has gotten me interested in a franchise I previously had no interest in and I am excited to delve back into the past and continue with them in the future - I will definitely go to a sequel and I hope Bryan Fuller gets to create this new TV show set in this brand new universe.

So yeah. It's great. I'm sure people will hate it (probably Bass and Houde, but who cares?) but I loved it. I read a review that not only is this a great Star Trek film (the best?) but it's a great science fiction film in general - and I absolutely agree.

This is the movie you want to go to kick off the blockbuster season. See it.
Last edited: May 7, 2009

If they do a sequel Nick Frost should play Welshy

*crosses fingers in hope that someone gets it*

Gemini said:
If they do a sequel Nick Frost should play Welshy

*crosses fingers in hope that someone gets it*
Click to expand...

Speaking of sidekicks, I was sure I saw Kumar in the background of one scene. 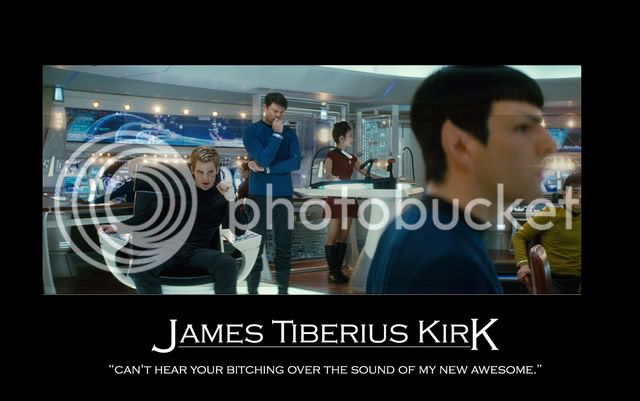 I kinda doubt you saw Kal Penn in the background, he's busy working for the Obama administration

Gemini said:
I kinda doubt you saw Kal Penn in the background, he's busy working for the Obama administration

I know, it was just the Enterprise's token Indian or something.

Gemini said:
I kinda doubt you saw Kal Penn in the background, he's busy working for the Obama administration

You forget this was filmed like a year and a half - 2 years ago. :wink:

Excelsior Club
I haven't heard good things about this movie.

I am so excited to see it, and I hope I can this weekend.

Oh, damn you for making me even MORE excited to see this movie!

Damn you all to hell!

Going to see it tomorrow morning. I wanted to go to the midnight showing, but our theater sold out in minutes, so they added two more shows, and they sold out too.

skotti-chan said:
Going to see it tomorrow morning. I wanted to go to the midnight showing, but our theater sold out in minutes, so they added two more shows, and they sold out too.
Click to expand...

I have to wait another week for it to get here .

Gemini said:
If they do a sequel Nick Frost should play Welshy

*crosses fingers in hope that someone gets it*
Click to expand...

looking forward to it!

Took quite a bit of work to convince my wife. I promised Japanese afterward; that probably helped.

I just re-read the JMS reboot treatment and I'm encouraged how this reboot could be applied to a weekly tv show. Paramount should reconsider this!

Well, I wanted to treat my friend to this on Saturday for his birthday, but unfortunately he has to work. But I'm still gonna see it this weekend.

Ironlurker said:
I just re-read the JMS reboot treatment and I'm encouraged how this reboot could be applied to a weekly tv show. Paramount should reconsider this!
Click to expand...

Any hopes for a link?

It looked like I wasn't going to get to see this until Saturday, which I was mad about because I really wanted that "opening night geek crowd" sort of thing on this one, but then everything worked out and we saw it tonight and it was awesome.

About a 4.5/5. No real flaws, the only thing keeping it from a full five star experience was that there wasn't much in the way of heart-rending emotion. In terms of the action/adventure elements, it's the best I've seen in ages. At least since Iron Man, only kind of better because it's like "I've always wanted to see this but have it look perfect, and now it finally does".
Last edited: May 7, 2009
You must log in or register to reply here.
Share:
Reddit Pinterest Tumblr WhatsApp Email Share Link