Avengers The return of Mighty Avengers.

Coming in September. But is it an ongoing or mini? No word yet on who's writing or doing the art.

I've never heard of Adam the Blue Marvel before.

He's a fairly new character, created in 2008, but has only appeared in a couple of stories.


Adam Brashear debuted in the five issue Adam: Legend of the Blue Marvel mini-series created by Kevin Grevioux. A different version later appeared briefly in What If? Secret Invasion #1 (February 2010). 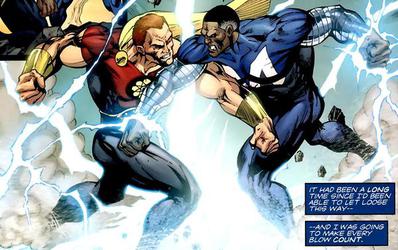 Series to be written by Al Ewing and art by Greg Land.

There are extra characters now...

Falcon, Ronin (Echo?), Photon/Captain Marvel (I think), and is that Blue Marvel at the bottom? He looks like Dr Fate.

Excelsior Club
Was Adam The Blue Marvel in the Captain America and Bucky story that Brubaker wrote?

As for the book...the lineup doesn't really do anything for me.

I like the idea of there being this HUGE Avengers organization which is kind of how Hickman is doing it in the adjective-less book. Certain characters are used for certain missions and he does a great job of using the appropriate characters in the appropriate settings. You didn't see Hyperion going to the casino on a black ops mission.

I just wish the different books would have a specific direction or specialty and they had the appropriate characters. Granted we don't know a ton about this, but it doesn't seem to be the case here. It's just a bunch of people.

Has anyone else noticed that Cage's goatee is exactly the same shape as the Mighty Avengers symbol?

Captain Canuck said:
Has anyone else noticed that Cage's goatee is exactly the same shape as the Mighty Avengers symbol?
Click to expand...

I'm a bit annoyed that there's now another Avengers title. I like the idea behind the book itself, but I thought Marvel would want to make it easy for fans of the movie to get into comics. With 8 Avengers titles now, it seems like it would be pretty overwhelming for new fans. Not to mention hard on the wallet.
You must log in or register to reply here.