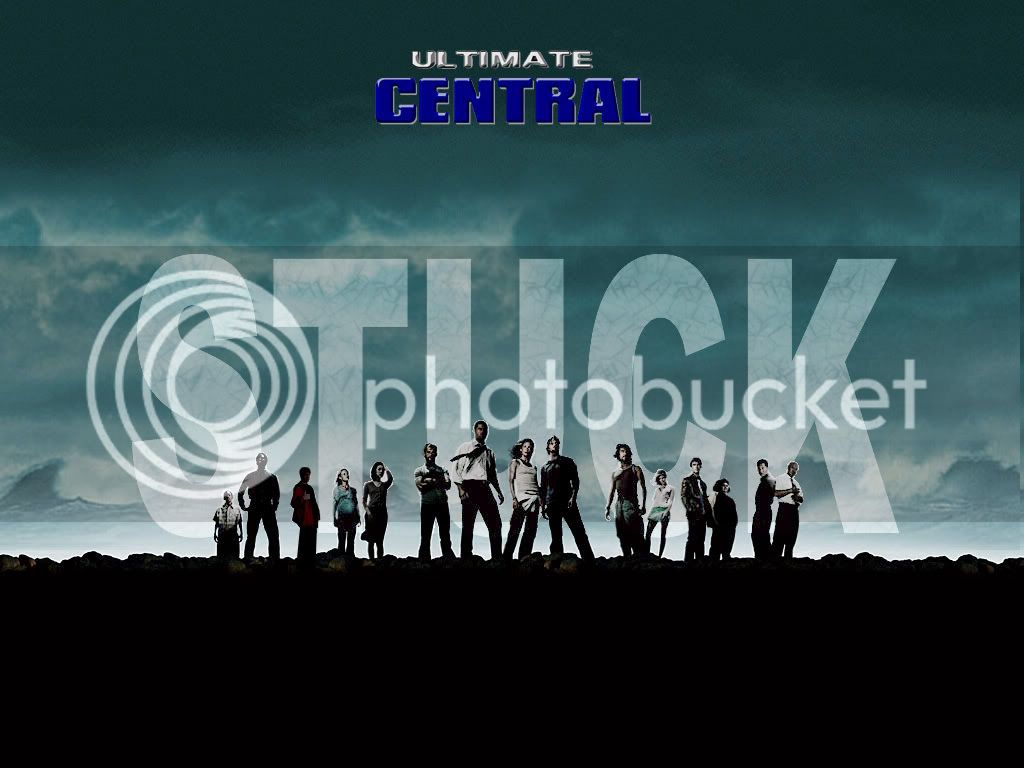 Forty Random People with intertwining pasts and the strangest of knots that connect them all.

Coming....MONDAY! The Beginning to a new ride, brought to you by the strange mind who brought you Law & Order:UC, and the man with the plan, ProjectX2, comes the newest fanfic based on the Ultimate Centralites. Plus all those folks over at Ideastorm that helped us....

Thank you Seldes, but I don't mind the comments, hence why I posted it in it's own thread, for speculation and what not. But, here it begins....


UC: STUCK​
The steamboat plodded merrily along the Mississippi, going it's fastest, a surprising 5 miles an hour. It was full of people, people of all types, all kinds, from all different type of backrounds. Two of these people sat on the lounge chairs on the decks, one was a New Zealander, and the other was an American. Both were lounging on the chairs sipping a drink, probably alcoholic because of all the umbrellas in it, and were engaging in some light conversation.

Maybe I should explain why all these people were on a Steamboat?

Naw, I'll let the story do that for you.

The American looked over to the New Zealander.

American: Name's Houde. Yours?
New Zealander: Project.
Houde: Pleased to meet you, wonderful weather, isn't it?
Project: You know, that every year, one half of all Steamboats crash in the Mississippi?
Houde: Um....usually people answer that question with yes it is, or, no it isn't.
Project: I'm just saying, we shouldn't be above deck.
Houde: Hey, I didn't drag you out here.
Project: Did you know, these small umbrellas in drinks are laced with a narcotic so you drink more of them?

Project then takes another sip of his drink.

Houde: Dude, do you listen to yourself?

From down the hall, a door slammed open and and a stocky, well built black man walks out wearing a black bullt proof vest, and black jeans. He looked at the two people on the deck.

Black Man: Hey, you brah's seen this person around?

He holds up a picture of some white guy with a goatee.

Then, they hear the sound of someone singing, it turns out to be a man, dressed in red clothes, singing to himself, obviously drunk.

MWoF: I've had, the TIME OF MY LIFE! AND I NEVER FELT THIS WAY BEFORE!
VVD: Is he singing a song from Dirty Dancing?
Houde: I think so.
Project: Do you guys hear that?
VVD: The horrible notes?
Houde: Wait, it sounds kinda like surf...

The three of them look out, and they see a wave heading for them.

Project: SEE! I TOLD YOU WE WERE ALL GONNA DIE!
Houde: CRAP!


Sploosh​
A TV is turned on in blackened room, a news report stated how a steamboat, on it's maiden voyage, disappear after a freak tsumani ran up the Mississippi river. Everyone is baffled at it's disappearance.

One of them shut the TV off, a goatee was seen in the flickering light.

Figure 1: Crap, I shut off the TV. Where's the damn light switch, I hate it when we try to be all mysterious and stuff.
Figure 2: You do this all time!
Figure 3: Goddamnit, I hate all of you.
Figure 1: Crap, when we find the door, you guys know what to do, okay?
Figure 2: Yeah, lists and all that, I got ya.
Figure 3: Guys, can I bang one of the hot chicks?
Figure 2: You always bang one of the hot chicks
Figure 1: AH! I just stepped on something! I'm never being onimous again!

Houde opened his eyes, he felt odd, strange, like he should be dead, but wasn't. The air was different, tropical, the sounds of surf told him he was on a beach...

MWoF: No one puts baby in the corner!

And obviously, the drunk was okay. Houde got to his feet, rubbing the back of his neck, and saw the propellor of the steamboat about to fall down.

Houde: Oh gawd, the humanity.....
Project: Houde, you a doctor, we have wounded! We need help!

A glint of sunlight hit Houde, as he heroically looked at Project to proclaim...

Houde: I faint at the site of blood...

and then he fainted.

Good job. This looks like its gearing to be incredibly funny. I kinda forgot that you, Houde, were around during the Lil Kis debacle. Ahh, the kids don't know what they've missed.

So, does PX2 play the woman? Cause thus far there arn't any woman on the blasted boat and that scares me. :shock:
Last edited: Oct 28, 2006

Haha! Awesome! I love the Lil Kis cameo, and the ominus scene.
M

Awesome. This could be the next UC: The Fanfic.

I better be around, that's all i'm saying...

I think you speak for most of us.:wink:

Good times, good times. I wonder what is happening to that incredibly handsome McCheese fellow when the plane... um I mean boat crashes.

McCheese said:
Good times, good times. I wonder what is happening to that incredibly handsome McCheese fellow when the plane... um I mean boat crashes.
Click to expand...

he gets squished between a ham and two slices of bread.

McCheese said:
Good times, good times. I wonder what is happening to that incredibly handsome McCheese fellow when the plane... um I mean boat crashes.
Click to expand...

Planet-man said:
Awesome. This could be the next UC: The Fanfic.
Click to expand...

Hopefully it won't be another six months till the next issue... Heh.

Dr.Strangefate said:
Hopefully it won't be another six months till the next issue... Heh.
Click to expand...

Well, the entire episode has already premiered at Ideastorm (cheap plug, woo!), and Houde is writing this in the format of Law and Order: UC - so imagine this short little break as the advertisements, or something.

While Houde was still in the blessed land of unconciousness, he remembered things about his past...

Houde was a scientist, a run of the mill, nucleaur physcist with a passion for atomic weaponary. Everyday he woke up, drove in an hour and a half traffic in his economic car, and then, worked eight hours, went home to his one bedroom apartment, and ate dinner while watching the news. He would then read for a couple hours, go to bed, and do it again.

My god, I feel asleep writing that.

Anyways, he worked under the best nuclear scientist ever, the great scientist known as Dr. Aeroth. Together, they dreamed of coming up with cheap and efficient fuel.

That was, until a fateful day, where an accident occured.....

Houde arrived to work late one day, his economic car sprung an oil leak, and he had to rent one instead. Arriving to his skyscraper building, he noticed something amiss with his great and underused mind.

The top of the building had blown clean off.

Houde: What? What happened?

A tourist, dressed in a Hawaiian shirt looked over at him.

Tourist: Ain't got a clue mate. I got the whole thing on film though, twas funny.

Houde gave the man a look.

Houde: my life...
Tourist: Well, look at it this way, at least you have time for a vacation mate, me name is LongshotJimlee, maybe I'll see you in another lifetime mate.
Houde: Vacation? What the hell can I do on vacation...
LongshotJimLee: I don't know, take a cruise or something....

Houde rolled over on the sand, spitting out a mouthful of it.

Person: I think he needs CPR.
Other Person: Then give him CPR TGO.
TGO: But it's a dude, TGO only gives CPR to Ladies Moonie.
Moonie: Dude, save his damn life.
Houde: I'm fine, I don't need CPR.
Moonie: And don't worry, this was a Gay Cruise, remember.
TGO: Again, why I don't want to kiss him.
Houde: Wait..this wasn't a gay cruise.
TGO: Please, yes it was.
Houde: I'm not gay
Moonie: It's okay, you can admit it to us. We only got on to get with the hot dance instructors that are always on gay cruises.
Houde: Yea, have any of you seen Project...
TGO: Is he your gaymate for life.
Moonie: GAYMATE!
TGO: SCORE!
Houde: Whatever, you guys seen him?
Moonie: I think he's over there, near the black guy whose threatening everyone with bear mace.
Houde: Thanks.

So Houde walked over to Project, but as he did, he saw something on the corner of his vision, a man...in a lab coat. Taking a quick look, the man was gone, he shook his head and continued walking.

OOC: And to people who are leaving comments at Ideastorm, leave them here as well please.
Last edited: Oct 30, 2006

Good story, though this was my favorite part!:lol:

:lol: so dope!
You must log in or register to reply here.