A few to tickle your funy bone.

Lets recommend some webcomics here, and/or post some funny comics (remember to link to the site, if they don't have the info in the image!)... I've got plenty of the older ones that I enjoy, but I'd like to hear what other people read these days...

Here's a good one:

You'll either have to edit it or remove the second one because of that word... remember, kiddies* view this site sometimes.

Hah! Its funny that I thought you meant goats, when there was a big ole f--k stuck in the middle of the Overcompensating one...

So I put up some new ones.

god, I love that superman one.

Perry Bible Fellowship is one of the funniest comics ever.
U

heres a web comic with probly the smallest fan base on the planet i don't even think it has a web site it just floats around abit, its poorly drawn and can be mildly fun
this one has abit of mravel probly best to be shown here

Location
On The Edge

Penny Arcade and Boondocks are all you'll ever need to read..... :rockon:
K


UltimateE said:
Perry Bible Fellowship is one of the funniest comics ever.
Click to expand...

And is that El Pollo Diablo?!

One of my favorite PBF strips:

Some of my favorites:

Least I Could Do 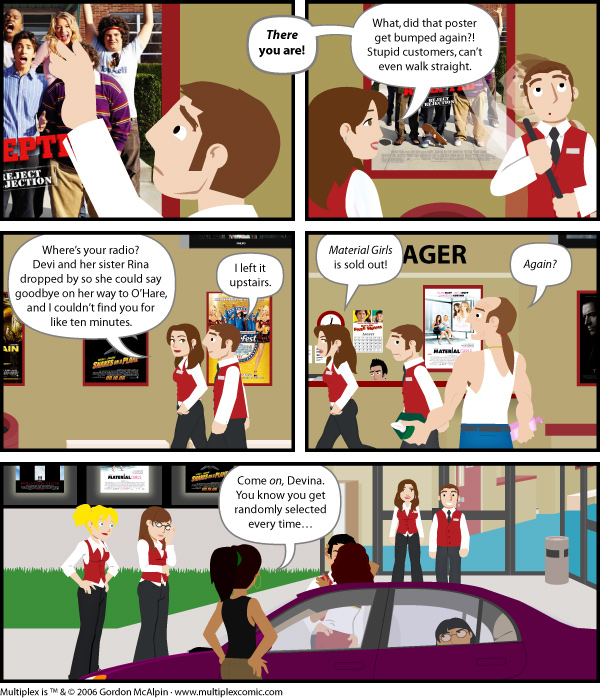 ooo!!! y'all should check out alienlovespredator.com!!!! :rockon:

I love www.vgcats.com the art style and the jokes.


Ultimate Quicksilver said:
I love www.vgcats.com the art style and the jokes.
Click to expand...

:lol: :lol: just looked at that one omg i loved the ones i've seen so far. thank you

I swear I could not find this thread last night.


Ultimate Quicksilver said:
I love www.vgcats.com the art style and the jokes.
Click to expand...

http://www.blastwavecomic.com/ The art is very cool, and its pretty funny.

This was going to be in order, but it isn't.

1. Boy Meets Boy - my favorite, despite it being finished. Gay Romance/comedy... Not everybody's thing.
2. Overcompensating - Anything Jeff Rowland does is gold. WIGU is/was also fantastic
3. The Jar - Great offbeat comedy, or at least I thought so back when the Jar Archives were on the internet... I like Kitty Hawk's newer project, Sparkling Generation Valkyrie Yuuki, but lost interest in it after months of little to no posting.
4. Megatokyo - I'm not caught up on the Archives, but I really enjoyed this series... Especially right when it started picking up steam after Rodney Caston left and Fred Gallagher was trying to prove his writing abilities
5. Perry Bible Fellowship - Funniest damn thing on the Internet
6. The Adventures of Dr. McNinja - Yes. It is exactly as awesome as you think it might be.
7. Wondermark - Also very hillarious.
8. Goats - I love Goats. One of the best, and longest running webcomics on the internet... And it's managed to stay funny and wonderful all this time (unlike... lets say... Sinfest, which has about as much punch as a quadripelegic these days)
9. Powerpuff Girls Doujinshi - ****ING AWESOME. Combines most of the Nicktoons and Cartoon Network shows of the past decade into one cohesive universe. Romance between Blossom and Dexter? Invader ZIM?? I just wish they'd get back to the story... It can be a long while betwixt new comics.
10. Exploitation Now! - I don't know why I like this series as much as I do. I think its for the most part because of Jordan... This is another finished series.
11. Demonology 101 - Great Horror/Fantasy Comic... Also Finished.
12. Scary-Go-Round - This is still around, but it was one of my favorites back when I was really into webcomics...
13. 1/0 - Philosophical comic about the relationship between a creator and his creations. Finished.