I really like this book. Some great moments with Gambit, Rogue, and Sinister.

i just noticed this 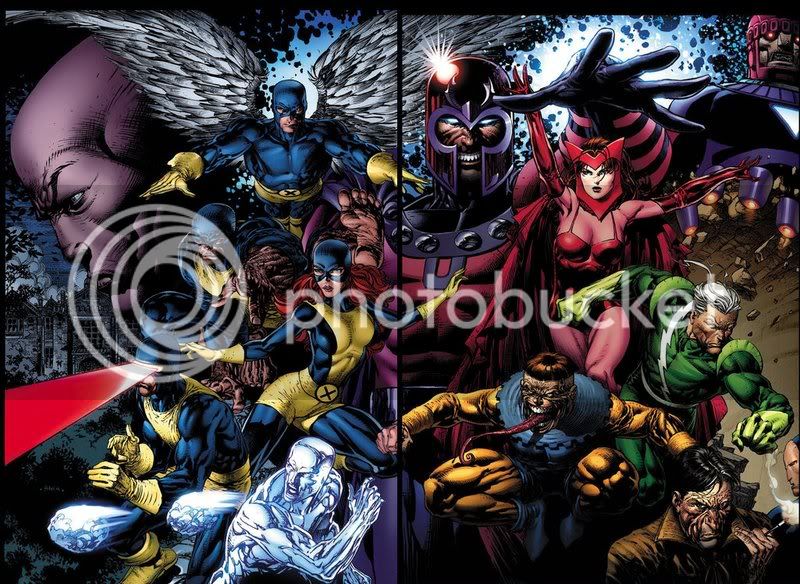 Gemini said:
i just noticed this

that's cool how they interlock but it's too bad the colouring is off between the covers
Click to expand...

The coloring is off and it seems to be the same colorist, too.

Also, the next cover will have the HFC- watch. You can tell by the old HFC grunt next to Mastermind.

this image just popped up

I'm posting it here because I am convinced it's the fourth X-Men: Legacy cover

I'm posting it here because I am convinced it's the fourth X-Men: Legacy cover
Click to expand...

Yeah, that seems very so. It's just how Finch has drawn the other covers, in terms of how he makes everyone (or just about) as if they were looking at you directly.

So Xavier is out of his coma and reunited with Magneto.

This was a fantastic issue playing off the history of Xavier and Magneto.

Xavier's answer on who won the debate between the two was well written.

I also love the character of Omega Sentinel.

Yeah, the series is taking a nice turn in what's going on. I'm eager to see what happens after this.

Carey is definitely someone who belongs writing in the X-world.

Looks great. Only thing I don't like is the way the color changes a tone or so from cover to cover.


Also, #210 and #211 were both great issues. Carey has been nothing but awesome since he started writing X-Men, and I hope he stays on for a good long time. To me, he could be the next Claremont (when he was good) in terms that he could write these guys for a long time.

I'm wondering, though, as to the ending of #210 where "Cronus" was mentioned. Sounds so vaguely familiar...

And then Gambit shows up in the end of #211. Should be interesting. I wonder how and where he and Rogue will meet up with Rogue being in the middle of a motorcycle ride in Australia.

I pretty sure Cronus is a Wolverine thing, from either the Origins book, or Loeb's Evolution arc

Everything about the issue was fantastic, from writing to art. I'm ubber pumped to see Mr. Sinister come in now next issue! And Gambit was freaking cool. I loved him completely in this issue and I actually hope he sticks with the Professor from here on out, though I doubt he'll be with him for too long.

Wish we could've seen more of Juggernaut in this issue, even if it was for a page or two like the issue before and hope we don't have to wait longer to see appear again.

Shihad said:
I pretty sure Cronus is a Wolverine thing, from either the Origins book, or Loeb's Evolution arc
Click to expand...