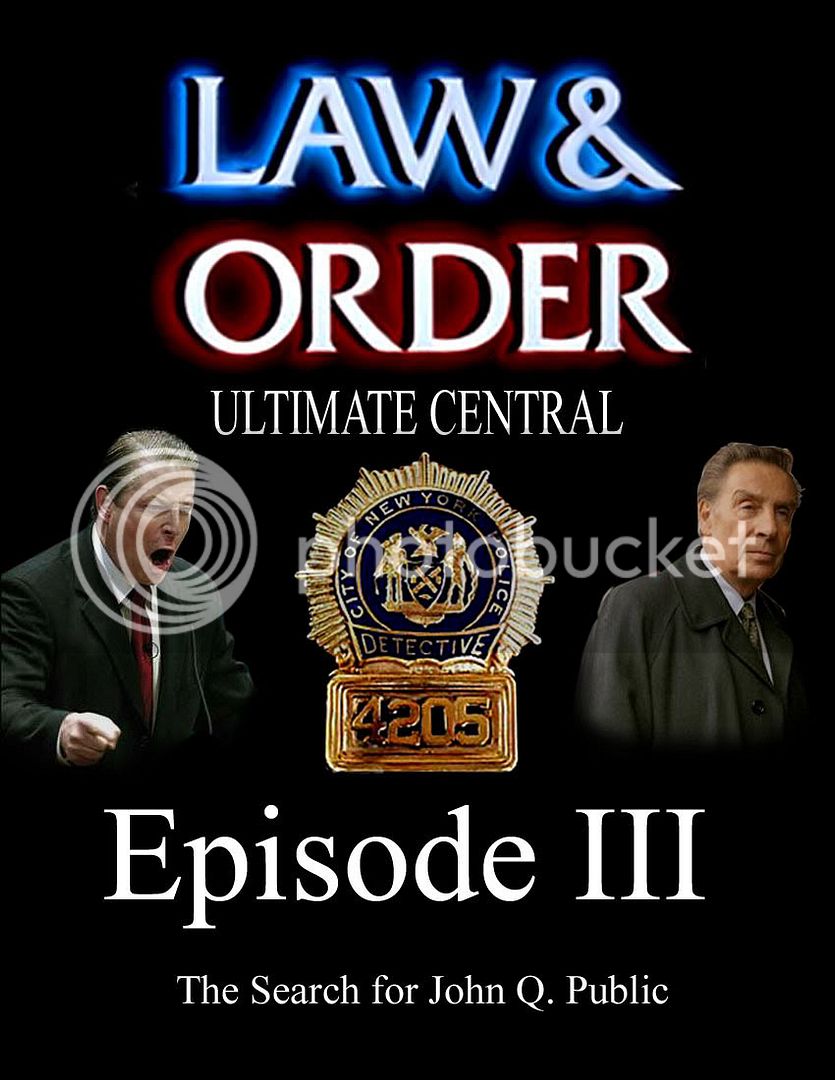 (Cover is E and ProjectX2)

The city of New York has recently experienced a power shift in it's underworld. The mob boss John Q. Public has been reported killed by the media, but his body is missing. E sends Houde and Bass, and Special Lance Constable Guji from England, after the missing body. Meanwhile, two rival gangs begin to war downtown, so once again E is called into action, and brings with him Ice and Nigma. ProjectX2 has a case of his own, tailing Hawkeye101 and Orson Scott Card while they protect a valuble witness for one of Cad's cases.

Will Houde and Bass be able to find John Q. Public? What has happened to Nurhachi and MWoF? Does compound speak any english in this one?

This episode is brought to you by Houde, compound and ProjectX2 (even if he doesn't know it).
Last edited: Nov 16, 2005

I can't wait to be on a cover.

John Q. Public is there, but no Doc? There's always room for Doc!

Doc Comic said:
John Q. Public is there, but no Doc? There's always room for Doc!
Click to expand...

Yes, Strangefate should return, or Dr_Draco could appear.:lol: And anyways, those are the people being introduced, you could still be in the episode.
Last edited: Nov 16, 2005

I thought Houde would of made me a rotting corps by now. Since you know he and I are Nemesises. Or just maybe he's going to have me in some dark room where you can't see the other guy as he beats me, slices me, and guts me.
Last edited: Nov 16, 2005

Excelsior Club
Please don't tell me that Al Gore is supposed to be me...

UltimateE said:
Please don't tell me that Al Gore is supposed to be me...
Click to expand...

UltimateE said:
Please don't tell me that Al Gore is supposed to be me...
Click to expand...

Blame Random, not me

Bass walks up to his desk, which was right across Houde's, and sits down.

Silence passes for a few minutes.

Bass: What is that smell?
Houde: No idea.

Skotti: Hey guys, E want.....What the hell is that smell?
Houde: Bass farted, surprised you didn't hear it.
Bass: I didn't fart, he's lying!
Skotti: Sure he is, my god that is an awful smell, E wants you two, and I'm getting a gas mask for that smell.
Houde: It wasn;t nice of him to do that to me, not something to do to someone first thing in the morning.
Skotti: Aw, poor baby, tell you what, come by my place tonight, and I'll make you feel better.
Houde: Naw, that's alright, I got other things to do.

He disinterestedly shuffles papers. Skotti look on in shock.

Skotti: Whats his deal?
Bass: I really don't know
Skotti: Is he dating someone?
Bass: No idea.
Skotti: Hmm....I need to get to the bottom of this.

She begins to walk away but turns around first.

Bass runs into Houde's office, pointing a finger at Houde.

E looks calmly up at Bass, and Bass notices a new person, British by the suit the man was wearing, and that damn strange hat those bobbies wear over there.

E: Did you just yell in my office?

E: Well?
Bass: Um...I...was..
E: Do you feel lucky....punk?
Bass: No
E: Yell in my office again, and I'm teaming you with Orson. Alright as I was telling Houde over here, welcome special Lance Constable Guji. He's here on the Cop Exchange Program.
Bass: Cop exchange program? Isn't that were MWoF and Nur went?
E: Yup.

A cloud of smoke hung low over the bench, so that only the feet of three people could be seen.

MWoF: I can't believe this is all you guys do here!
Nur: This is awesome! We are so hitting the strip later on! Isn't that right Private Fuzzy Brids.
Fuzzy Birds: Hell yea!

E: I decided they needed a break after the Strangefate fiasco.
Houde: So, who's he being teamed with?
E: You guys, I need you three to protect a witness.
Houde: So, we have a reason for this?
E: Yes, Typhiodcat is a witness to a murder, and Cad needs someone to watch over her.

As if on cue, Cad comes walking in, with a beautiful girl behind him.

Cad: Sorry I'm late E, guys, oh, you must Guji, good morning.
Guji: Morning? It's still late night where I'm from. And I have to be up at SEVEN!
Cad: Sorry to hear that.
Guji: No your not
Houde: Is this Typhiodcat?
Cad: Yes, and we want you to...

E: RHYO? WHAT THE HELL YOU DOING CHARGING INTO MY OFFICE?
Rhyo: E, I remember when you were the captain of a useless police force, oh wait, you're still the captain of a useless police force. Oh, hi Bass, Houde, Cad, strange british guy, and random hot chick.
Houde: Hey
Bass: Rhyo
Guji: I think I'm in love.
E: What do you want?
Rhyo: Listen to the news lately?
E: Been busy doing work, some of us do that you know.
Rhyo: Well, if you weren't so busy you would know this nugget, John Q. Public has been killed.
E: The mob boss?
Rhyo: Glad to see your still smart at least. Old age hasn't dulled that brain of yours.
E: That was for the readers, and you know it.
Rhyo: Anyways, we don't think he's really dead.
Bass: Why is that?
Rhyo: No body smartass.
Bass: Hey, that's not cool. She hurt my feelings.
Rhyo: Tell someone who cares. Anyways, the higher ups want you to find him E, before the gangs decide to take to the streets and fight back.
E: Houde, Bass, change of mission, find John Q. Public.
Houde: Still want us to bring the Brit?
E: Yup
Guji: I have a name jackass.
Rhyo: I like him.


UltimateE said:
Please don't tell me that Al Gore is supposed to be me...
Click to expand...

Yeah, sorry buddy but I couldn't find a better picture of someone yelling, so I had to settle for this. I hoped no one would notice since its so out of character for Al. Once again my apologies goes out to you and your love ones.

You say this now

Ultimate Houde said:
Cad: Sorry I'm late E, guys, oh, you must be Guij, good morning.
Guij: Morning? It's still late night where I'm from. And I have to be up at SEVEN!
Cad: Sorry to hear that.
Guji: No you're not.
Click to expand...

That bit of dialog is just so... so.. appropriate.

The set-up for this episode is coming together perfectly!
Last edited: Nov 17, 2005

And I thought we had something special.

Heee heeee heeee. I like this a lot.
You must log in or register to reply here.

Saturday at 1:25 AM
selfishmisery