Looks like the latest GameInformer (Issue 154, February 2006) has some great exclusive information (and pictures) on the next installment of everyone's favorite fighting game series: Mortal Kombat: Armageddon. Here is the information found within the mag:

60+ characters. Almost every character from all previous MK games. (Noticably absent, however, was Motaro.)
Improved air kombat
All new konquest mode that will play similarly to MK: Shaolin Monks
Kustom Fatalities - Each character will have a pre-set of around 20 moves in which to dispatch their opponent.
Create-A-Character
An all new Krypt
Screenshots and renders from the game!

The game will be released in October 2006, on the current-gen systems such as PS2 and Xbox.

I haven't played a Mortal Kombat game in ages, but I've loved them for a while. This game may be the one to pick up, though, since there are a lot of characters, including a create-a-character bit, and it seems like they've added lot more content. Great.

I've always liked Mortal Kombat because behind the brutal killings, it actually had a sick and twisted story to it. Like in MK2, how Kano was supposed to kidnap Sonya, and in the background of one stage you can see them both chained up. I always thought that was awesome.

I never got too much into the 3-D ones, but maybe one day. This new one sounds cool, but I wouldn't be surprised if it's not released for GameCube, which I own.

I want to reply to this topic, But I don't know what to say. But I'm so FREAK'N MK-geeked out right now, I'll just say this...

my scans will be up in a min! 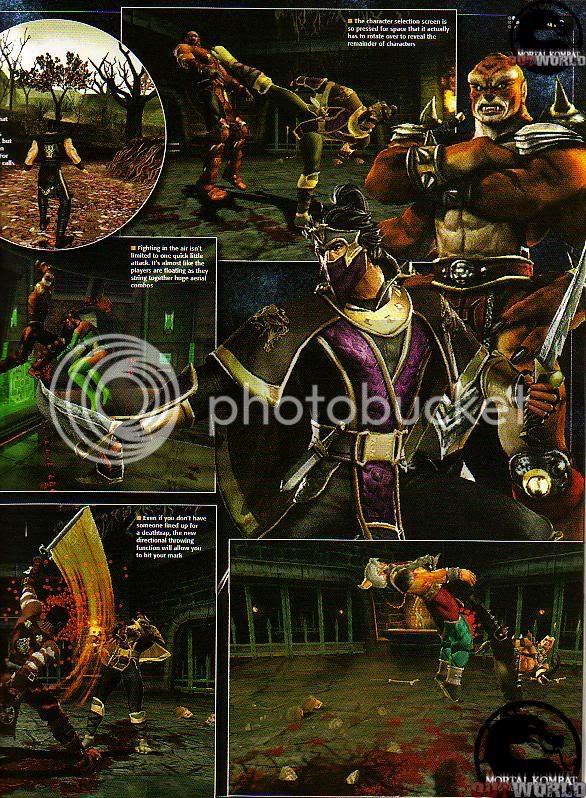 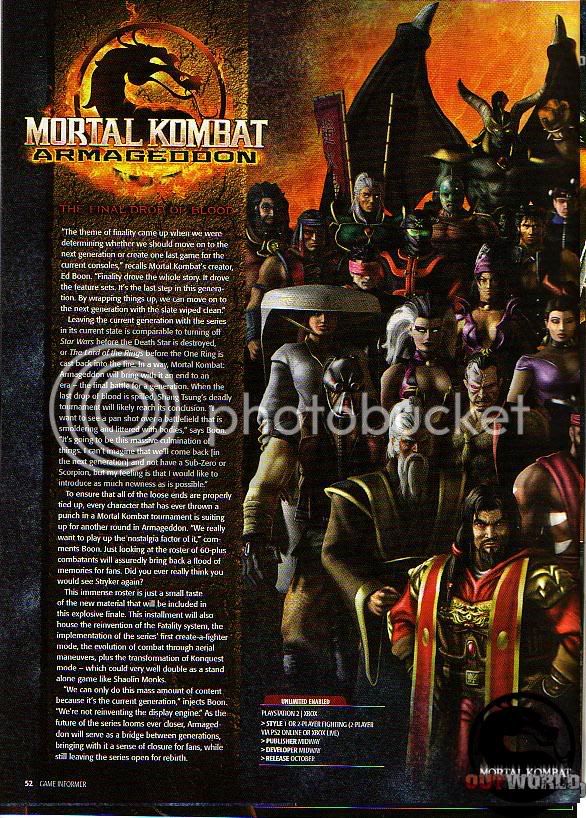 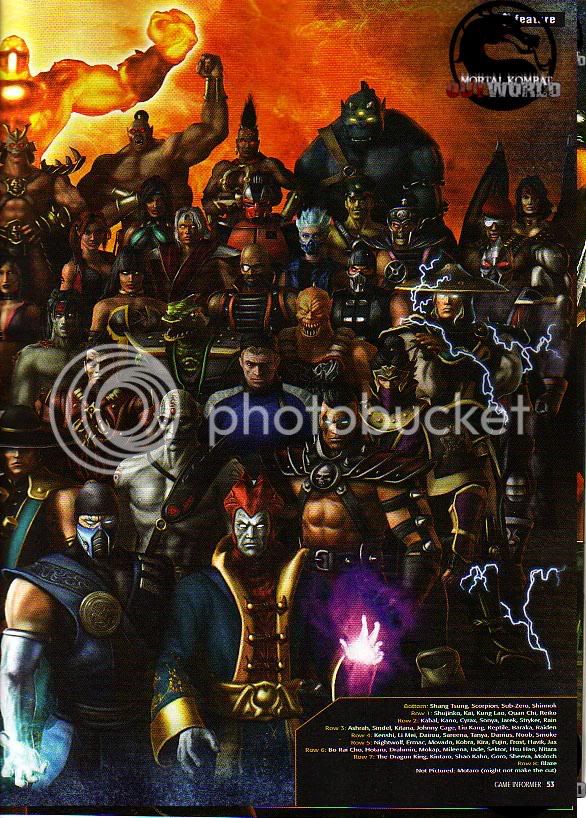 Looks good, I've always been a MK fan, but i thought that MK shoulin Monks could have been a little more improved. I didn't like the fact that there were so many areas which a the playable character could not enter, but looked like it could. (i really wanted to help some of my fellow Monks.) I also like in Armageddom how MK i living up to MKtrilogy from back in the day. It had all the characters and i'm a fan of variety, the more the better. I just hope they will all be playable though.

slimjim said:
60+ characters. Almost every character from all previous MK games. (Noticably absent, however, was Motaro.)
Click to expand...

?? You mean moves performed when jumping/flying?

All new konquest mode that will play similarly to MK: Shaolin Monks
Click to expand...

Sounds cool. Never played Shaolin Monks, but it looks good. Should be an improvement on the last two konquest modes, lol.

Kustom Fatalities - Each character will have a pre-set of around 20 moves in which to dispatch their opponent.
Click to expand...

They promised this with Deception, but didn't deliver ... Though from the way this one sounds so far, I think it will happen. I've so wanted this for awhile :rockon:

Meh... Aside from unlocking characters, I never really thought much of the Krypt... However, the "Cooking with Scorpion" video from Deadly Alliance has to be the most awesome video ever... lol

The game will be released in October 2006, on the current-gen systems such as PS2 and Xbox.
Click to expand...

Gameinformer said:
The final Drop of Blood
"The theme of finality cam up wehen were determinig whether we should move on to the next generation or create one last mage for the current consoles" recalls Mortal Kombat creator, Ed Boon. "Finality drove the whole story. It drove the future sets. Its the last step in this generation. By wrapping things up, we can move on to the next generation with the slate wiped clean."
Leaving the current generation with the series in its current sate ist compatible to turning off Star Wars before the Death Star is destroyed, or the Lorad of the ings befor the One Rin is cas back into the fire. In a way, Mortal Kombat: Armageddon will brin with it an end to an era - the final battle for a generation. When the last drop of blood is spilled, Shang Tsungs deadly tournament will likely reach ists condusion. "I want to see a pan shot over a battlefield that is smoldering and littered with bodies," says Boon.
"Its going to be this massive culmination of things. I cant imagine that we'll come back[in the next generation] and not have a Sub-Zero or Scorpion, but my felling is that I would like to introduce as much newness as is possible.!
To ensure that all of the loose ends are properly tied up, every character that has ever thrown a punch in a Mortal Kombat tournament is suiting up for another round in Armageddon. "We really want to play up the nostalgia factor of it," comments Boon. Just looking at the roster of 60+ combatans will aussuredly bring back a flood of memories for fans. Did you ever really think you would see Stryker again?
This immense roster is just a small taste of the new material tat will be inclued in this explosiv finale. This installment will also house the reinvetion of the Fatality system, the implementation of the series' fist create-a-fighter mode, the evolution of combat through aerial maneuvers, plus the transfomarion of Konquest mode - which could very well double as a stand alone game like Shaolin Mons.
"WE can only do this masss maount of contend because its the current generation," injects Boon. "We're not reinventing the display engin." As the future of the series looms ever coloser, Armageddon will serve as a bridge between generations, bringing with it a sense of closure for fans, while still leaving the series open for rebirth.
Click to expand...

Stryker, Kintaro, and A NEW AND IMPROVED AND BADASS-LOOKING RAIN. HELL YES.

slimjim said:
60+ characters. Almost every character from all previous MK games. (Noticably absent, however, was Motaro.)
Click to expand...

All new konquest mode that will play similarly to MK: Shaolin Monks
Click to expand...

OMG YES That would be awesome

Wait? Wheres Scorpion? and whos that fella next to Stryker? Not Rain, the other dude

I will get this if it has Smoke (the ninja).


I always loved the characters and story but I can't really get into it. It moves to slow for me.

Nurhachi said:
Wait? Wheres Scorpion? and whos that fella next to Stryker? Not Rain, the other dude
Click to expand...

thee great one said:
I will get this if it has Smoke (the ninja).


I always loved the characters and story but I can't really get into it. It moves to slow for me.
Click to expand...

Every fighter to ever throw a punch in mortal kombat :twisted:

thee great one said:
I will get this if it has Smoke (the ninja).
.
Click to expand...

Smokes there in front of Jax

slimjim said:
It's rieko from MK4
Click to expand...