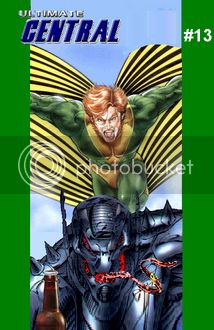 Ultimate Central #13
Written by ProjectX2
Cover by Nurhachi
"BLOODY IRISH"
Two weeks after the battle with E, the Avatars are settling in to their new freedom. But what lurks in the shadows? Something evil is going on that doesn't have anything to do with the E-Men or the Cabinet. Could this new enemy be part of their own? PLUS: Witness the exciting debut of Irish4204!

I got the whole of volume 1 in here:
http://www.ultimatecentral.com/forum/showthread.php?t=2481

As for making a new thread. I dont mind, but you'll have to see if its ok with the mods

Nur does the covers so all credit goes to him. Just a note - This issue shall be a little shorter than others. But rest assured others shall be normal lengh, maybe even longer.

I'm pumped for this because Irish_4204 is coming.

YEAAHHHH! From the looks of it, I WILL speak! WOOT!

YES. Finally I'm going to debut. Bloddy irish? Hmm. Wonder what my powers will be....

Look at my location!Just messin with ya

Hey Patiot. did you read the issues that you were in? you were in issues 9 to 12 in volume 1: http://www.ultimatecentral.com/forum/showthread.php?t=2481

The issue should be up today sometime.


A bar in Ireland somewhere…

Karaoke night was famous around these parts. Every drunk guy would get up and sing a song. The more drunk you were the more foolish you were. Unfortunately karaoke night was nearly over. There was only one guy left to sing. His friends called him Irish. On Ultimate Central he was known as Irish4204. The drunk guy. He stood up on the stage and grabbed the microphone. He had just eaten 6 packets of pretzels and drank 8 beers. He was feeling great.

The crowd cheered. He opened his mouth and sang. But instead of his normal voice some high-pitched scream came out. His voice broke all the glasses and bottles. People were covering their ears. He couldn’t stop. He kept screaming. Sound waves began tearing apart the building. A loud pop indicated someone’s head had just blown. More pops. The screaming finally stopped once everyone was dead. Blood and brains littered the floor. Irish was hardly ever sick but he could hardly keep it in. So he ran. And he didn’t stop running.

Nurhachi looked at what he now called his home. UltimateE, an alien that had used him for his own purposes, had run Ultimate Central. Now it belonged to six superheroes. Nurhachi was one of the first UC members to get powers. He was also one of the most powerful. He called his own part “House of N” and had set up a rather large television which he watched wrestling on. Rene, the master of cyber-space walked in.

RENE: You know you should be training. Never know when another threat will come along.

Ultxon, a massive super-computer shaped like a human walked in. Rene had upgraded him so he now had a lot more technology. ProjectX2 had also been working on him. He now had a “tongue”.

ULTXON: Greetings Master Rene. Another superhuman has popped up somewhere in Ireland. He is drunk and seems to be yelling rather loudly. Master Nurhachi – Master ProjectX2 has finished the upgrading the “Eroz Program”. Would you like to run it?

ULTXON: Uploading Eroz Program. Finding file. Random fat of the day – 95% of cows like to use hot chilli sauce instead of toothpaste.

NURHACHI: Dude. That was lame. Perhaps you need to inject some of my blood with Ice’s to hear some hilarious Justin Timberlake jokes.

Everyone suddenly went quiet. Ice had been missing for two weeks now. It looked like he wasn’t coming back.

RENE: Well, Ice or not, you have a superhuman to stop.

A light emerged in Ireland as Nur, PX2 and Ultxon suddenly appeared.

VOICE: Dude! Wait for me!

MANWITHOUTFEAR: Why ain’t no one tell me we’re going to Ireland? I’ve got history with this place.

ULTXON: Master ManWithoutFear. I have successfully arranged a date with one of the “hotties” you met the other night. It’s at 7:00 tonight at the Hot and Spicy Resturant.

IRISH_4204: RAH! I AM INVINCIBLE! I CAN YELL LOUDER THAN ANYONE EVER! I AM THE KING OF THE DRUNK!

PROJECTX2: Looks like another Baxter wannabe. Let’s get him.

MWOF: I’ve made a law about fighting drunks. I’m only allowed to fight them if I’m drunk. So… Ultxon?

Ultxon opens up his chestplate.

Ultxon had a whole universe built into him. He could ask for anything and it would come through. Anything except Harry Potter. Unfortunately, he only had enough energy to keep it open for one thing to come through at one time. So now he charged down.

NURHACHI: Damn! I guess it’s up to you and me Proj!

Nurhachi morphed his blood into a ball of spikes and jumped into Proj’s arms. PX2 threw him as hard as he could in Irish4204’s direction. Collision was inevitable. The force was powerful that it knocked Irish into a frozen lake.

Irish opened his mouth and screamed like he had never screamed before. The ground began to shake and everyone covered their ears. Nurhachi’s blood began to go crazy. It suddenly morphed into two different colours – purplish blue and bright red. The blue colour separated from Nurhachi’s body and disappeared through a crack in the ground.

But no one heard him. Irish kept screaming. Only Ultxon could stop this. He had enough power to do one more thing. He recorded the screaming as a file in PX2’s mp3 player. He then teleported himself so he was right next to Irish. He shoved his hand right up to Irish’s ear.

MWOF: Damn, that was cool.

The members of the Cabinet all eyed each other. They sat around a round table. Who knew what were in their minds. They were all probably plotting revenge.

GOODWILL: Yes, I’ve been thinking of taking over the White House and electing me President.

BAXTER: Shut up and stop dreaming! Deal the @#%#$% cards already!

Back at Ultimate Central…

Irish4204 had been put into the prison with Moonmaster until they could find a better place for them. The other criminals had broken out, but had not done anything dangerous yet.

RENE: From what I know, I’d say that was your bad side. Everyone has a good and a bad side. Yin and Yang. Light and Dark. Irish’s sound separated the dark from you, at least the blood.

NURHACHI: But I’m still the same old Nurhachi. I still swear and think bad and crap.

RENE: That’s something that I do not know yet. Further research will have to be done.

Ultxon hovered over to Rene and the others.

ULTXON: Master Rene – You might want to see this.

RENE: Um guys… there is something you might want to know.

RENE: This is bad. Very bad. Nurhachi’s dark blood has attached itself to an Ultimate Central member.

That was one major ending keep up the good work.

Nice beggining chapter. The ending was pretty cool. But...I'm not in the issue! :cry:

Today at 1:25 AM
selfishmisery