If anyone at all have been reading Astonishing X-Men, you would know that at the end of issue #3, it was ended with us believing that Jeans body has been used to test the so called "cure".

Well my fellow board members, I disapprove of that. I may be wrong, but you wanna know why I say this? Because of the variant cover to issue #4! Here it is. If you dont wanna be spoiled, you shouldnt have entered! 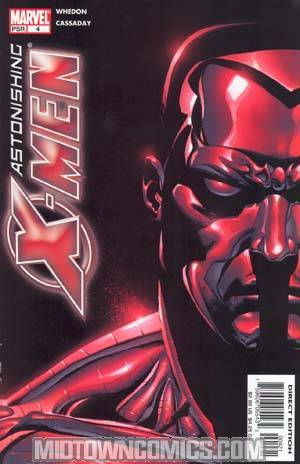 Yep, its none other than Peter Raspuntin, a.k.a. Colosus!!!!

Excelsior Club
I saw this...I'm surprised. Not sure what to think about it, although I do think that his death was pretty hokey. Good job to Whedon with the false lead at the end of #3...

Cremated? No. Never heard of that. But I also give props to Whedon. That was on one hell of a cliffhanger, that wasnt even true! Love those kinds of plot twists!

And by the, this variant cover with Colosus, dont know if it has extra stuff in it, but it costs $10.00 bucks. No lie!

Excelsior Club
The cover price is $2.99. Each retailer sets his own price.

Yes, I'm pretty sure Colossus was cremated after he injected himself with the cure for the Legacy Virus.

Also, I don't want to see Colossus alive again without his powers... If they used the "Cure" thing on him, wouldn't that take away his steel skin? Yeah, right...

Also, who is Ord?

I'll let you know in a couple hours after I get and read the issue.

Goodwill are you not getting this issue? Do you read the series?

I really have to get the first two issues and the third but I am dying to get them! Colossus is my favorite X-Men of all time and I love, love, love Whedon. I don't know what I should do!

Also, is Ord an original character?

Guys, get ready for the shock of your life!! Colosus is back! ALIIIIIIIIIVE!!!

And UltimateE, the cover with Colosus on it is $10.00. The variant cover. Like I said, when you click on the link, go down a bit and you'll see it. Its right under the regular cover.

And as far as I know, Ord was created by Whedon. Never appeared any where else in any Marvel book before.

And I was told today that he was cremated. Kitty had scatted his ashes over Russia. But he's back, and he does has his powers GW. He literally almost knocked some guys dead! They showed him in his armor, then going back to his "normal state." This issue deserves a 10/10!

Now I bet you're happy about this GW. Having Colossus back on the team?! I know I am. Glad he's the returning classic charater!

And UltimateE, the cover with Colosus on it is $10.00. The variant cover
Click to expand...

I know - but that's how much MidTown is selling it for. All I meant is that the price is going to be different everywhere you look. But the cover price (the price set by Marvel) is 2.99 - you can see it when you click on the cover at MidTown and the larger scan comes up.

Yeah, I am really wondering how Colossus is going to be brought back... It can't go without explanation. I don't know much about how he died other than he had to kill himself for the cure of the Legacy Virus and then got burned... What are they going to do?

Excelsior Club
Well for one thing, it looks like they're working off the premise that he was never dead in the first place... :shock:

Exactly. So who's ashes did Kitty spread over Russia? And who really got cremated?

And where did the real Colossus go in the mean time?

Well, Whedon will explain all soon enough. But maybe some body's where switched when he had to be cremated, or something. And since then, they've tried to experiment on him.

But thats just me.

Well, when is the next issue out? I'm anticipating the explanation like crazy!

Excelsior Club
Scheduled to be in stores Sept. 22...

And we still cant see the cover right? Cuz the red Colossus cover was the variant to issue #4.
You must log in or register to reply here.
Share:
Reddit Pinterest Tumblr WhatsApp Email Link