I've just skimmed through a bunch of forums and they're all discussing a Green Lantern: Blackest Night checklist that was apparently released which spoils a lot of things... and they all forgot that it was April Fool's Day.

If they were true, it would've been very interesting... and very expensive.

Though I believe this bit is true: 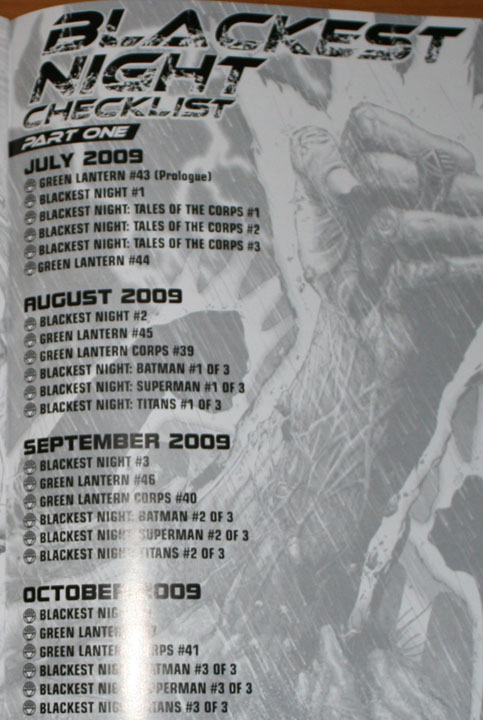 
ProjectX2 said:
It's just the second half that was fake.
Click to expand...

If they actually revealed that last bit in the solicits, it would be most idiotic thing ever.


Dr.Strangefate said:
If they actually revealed that last bit in the solicits, it would be most idiotic thing ever.
Click to expand...

I'm excited about this.

Seems like the Blackest Night Justice League idea is becoming plausible now that we've got Superman and Aquaman... and
Martian Manhunter
was revealed in a toy line and presumably Batman will show up too.

What are these rumors?!?!

Is that
Aquaman
? He's dead?

That the Black Lanterns are going to be dead JL members, like Supes from Earth 2, Batman, the missing Aquaman who hasn't been seen since Infinite Crisis.

Not much is known about Aquaman except there have been various versions of him around lately (there was one in Final Crisis which was supposed to be the new version but Didio said came from an alternate universe or something; no one knows what's going on) and that he's going to play a major part in Blackest Night.

I inverted the teasers to get a closer look:

Aquaman was changed into some squid looking thing after Infinite Crisis and later died.

I wonder if this means that there's a chance that Blue Beetle, The Question and maybe a better part of the 4th world gods will return as black lanterns.

So are these Black Lanterns supposed to be basically zombies? I remember Johns talking about how Black will be the absense of anything like Willpower,Rage,Fear,Avarice,etc. would that include life? explaining why these dead characters would be part of the Black Lanterns, just their bodies being active without the personalities behind it? Leaving them as super-powered meat puppets?

With Bruce Wayne's psyche being zapped through the timeline leaving his body behind.... do you think there would be a Black Lantern Batman aswell?

I only have tertiary information about all this stuff, I've downloaded all of GL and Morrisons Batman, but I haven't gotten around to reading them (did read Morrisons Batman up to #666, great stuff)

omg im so sick of dc ripping off marvels ideas!!11 this was bettr the first time i read it when it was called marvel zombies lol!!!!!!!!!111

I said nothing of the sort.

I want to see zombie Hawkman.

I wonder if the Teen Titans will have to fight Zombie Terra.

I trust Johns enough to create something completely different and probably far better than MZ's.


Gemini said:
I said nothing of the sort.
Click to expand...

I implied nothing of the sort.


E said:
I implied nothing of the sort.
Click to expand...

Then we have no conflict.