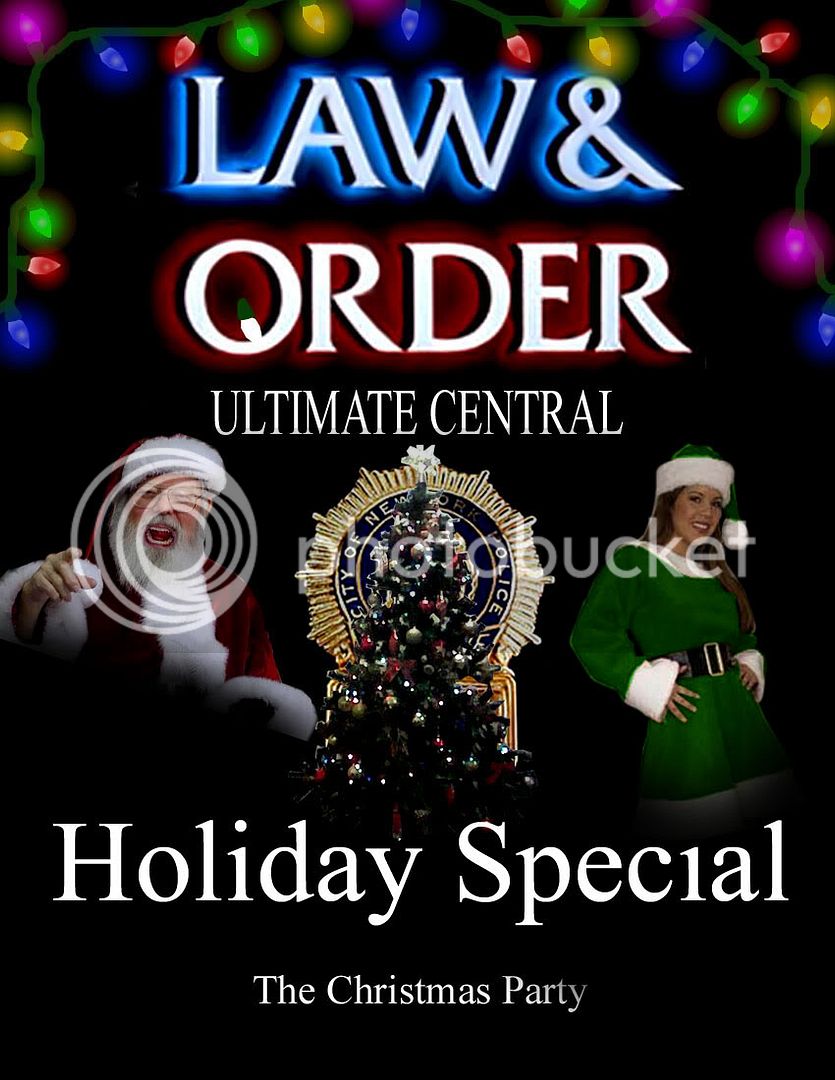 It's Christmas time at the 82 precinct, but will the party go off as planned. Houde feverently rushes around the 82 precinct, trying to drum up attendance for the party, but with the melancholy that has wound its way into the police force, will the party ever get off the ground? Bass has gone on a downward spiral every since his half brother, Mooney, took over the crime syndicate in New York City. Ice and Nigma start to have 'new partner' problems. Ourchair and Compound have better things to do, and E is yelling at everyone these days for anything. The only two people having fun seem to be Nurhachi and MWoF, because they have a gift for DIrishB and don't plan to be at the party anyways.

Is all lost, will anyone find the meaning of Christmas? And what does the strange bum named Curly have to do anything that's going on?

Come to the holdiay party of the year, and most likely the only one to be held in a police station!

Ultimate Houde, are you expecting so many people to read this that we'll need two copies? :wink:
Last edited: Dec 14, 2005

Seldes Katne said:
Ultimate Houde, are you expecting so many people to read this that we'll need two copies? :wink:
Click to expand...

No, my computer was acting slow, and I hit the submit button twice, feel free to delete the second one.
Last edited by a moderator: Dec 14, 2005

Random said:
Cant wait to read it
Click to expand...

And now the Ultimate Central Fanfiction and Art Forum proudly presents the one, (the only)

Take it away, Ultimate Houde!

And now the Ultimate Central Fanfiction and Art Forum proudly presents the one, (the only)

Now with the correct spelling!

No, my computer was acting slow, and I hit the submit button twice, feel free to delete the second one.
Click to expand...

In other news, the virus that ransacked my computer this morning is almost gone.

There's one trojan left, hiding out in my internet explorer.

It will die like how Thor would kill something

With lots of smiting

The 82nd Precinct was decked to the halls with all sorts of goodies. Wreathes hung on every door, lights on all the stair rails, trees in the grand hall, and Houde was running around wearing a Christmas hat, and spreading Christmas cheer. It was his favorite holiday after all. And he planned on spreading his Christmas cheer to everyone, which including his partner, Bass.

After recent weeks, Bass has been forlorn, his half brother, Moonmaster, has taken over the criminal underworld, and has put him in an awkward position. And he also lost to Hawkeye101 in chess. He wasn’t in the mood to celebrate Christmas, he wasn’t in the mood for much of anything, and then Houde came skidding around the corner.

Houde: Merry Christmas!
Bass: No, not merry, merely adequatatious.
Houde: What?
Bass: Adequatatious, the state of being adequate.
Houde: You could have just said, I don’t know, adequate.
Bass: I’m not in the mood
Houde: You need to cheer up, you know that? So what if your half brother murdered the former crimeboss and took over the criminal underworld, it’s not like your related or something.
Bass: You realize that’s a Hawkeye101 comment, you know that?

Suddenly a familiar yell echoed across the room.

E: HOUDE! GET YOU HAIRY WHITE BUTT IN HERE NOW!
Houde: I guess he found my decoration, gotta go!

Houde runs towards the source of the sound. Bass shakes his head, and decides it’s time to do some patrol. He gets up and leaves. Houde enters E’s office.

E calmly steps away from his desk, which is covered head to toe in the liquid fake snow. Cad is laughing his *** off behind them.

E: Do I like? Do I like?
Houde: Ya, do you?
E: You get like this every year, the moment Thanksgiving is over, you jump at the chance to start decorating for the Christmas party, and constantly try to make me actually like Christmas.
Houde: You like then?
E: You better get out of my sight and stay out of it, until the Christmas party tonight, cause if you don’t, I’m going to do something….mean.
Houde (backing up): Oh, there wasn’t even a fake threat in there, no insult, nothing….
E: No, there wasn’t.
Houde: I’m out, see you at the party tonight.
E: Not after this fiasco you won’t.
Houde: What?
E: GET OUT!

Houde runs out of the office.

Cad: Come on, the fake snow man even looks like you.

There is a lifesize fake snowman in the corner of the room, semi melting. E shakes his head.

SlimJim found himself in a familiar situation.

He was being interviewed by ProjectX2.

ProjectX2: Ok, let’s skip the comedics of this okay? You speak to me in English, and not that strange dialect you speak. Comprende?
SlimJim: Indubitably
ProjectX2: Good, name
SlimJim: Charles Xavier Goodfellow the third.
ProjectX2: Wow, that’s a big name.
SlimJim: YEA!
ProjectX2: Okay, what did you do this time Charles?
SlimJim: Well, I was in the process of robbing a small old lady, purely for the fun of it, when those two cops arrested me.
ProjectX2: Which two cops?
SlimJim: Those new ones, Ice and Nigma.
ProjectX2: Did they argue?
SlimJim: You mean they don’t?
ProjectX2: Well, at least you’ll be in jail for the Christmas party.
SlimJim: I was here last year, it was great.
~~~

Ice: So Nig, you coming to the Christmas party?
Nigma: My name is Nigma, stop calling me stupid pet names.
Ice: Cause if your not coming, then I don’t wanna.
Nigma: What the hell am I? I’m your partner, not your friend.
Ice: Why do you always say that? Look at Nurhachi and MWoF, they are friends.
Nigma: That’s cause they share interests. Mainly booze and weed.
Ice: Don't forget about that cannabis, but that’s not the point. What about Houde and Bass, they’re friends.
Nigma: Do you see them hanging out anytime after work hours?
Ice: They are always working.
Nigma: Yes, yes they are, and since they are partners, they are always working together. Now, stop talking to me, I’m trying to finish up this report.

A few minutes pass in silence.

Houde continues to run around the precinct, throwing up random decorations. His movement causes him to run into OurChair and Compound's room. He pauses once he sees what’s on the screen.

Houde: I don’t think you guys can look at that stuff during work.
OurChair: We can’t?
Compound: Me likey cow pie!
Houde: Yes, we all know that Compound, but come on, you guys are looking at porn chicks, at work.
OurChair: PG chicks
Houde: PG?
Compound: Cause me likey gasses.
Houde: Gasses?
OurChair: He means glasses, he’s got a hard on for this chick in a comic, Gerd someone
Compound: GERT!
Houde: Wow, he’s mean when you insult his chicks.
OurChair: Which is about every PG chick on the planet.
Houde: Anyways, going to the Christmas party?
OurChair: Actually, we are going too a party at a club tonight
Compound: To get us sum cow pie!
OuChair: Well, what he said.
Houde: Damn it you people, no one’s coming to my party!
~~~

Outside, on the Brooklyn Bridge

Bass was letting his feet walk for him as he thought about what his half brother has become.

He paused to look up, and saw something and he instinctively reacted.

The bum who was about to jump turned to look at Bass.

Bum: Why not?
Bass: Cause it’s not worth it.
Bum: What’s not?
Bass: Damn it, where’s Skotti? She’s more effective at talking people down off bridges.
~~~

Skotti: Get down off the building!
Jumper: NO!
Skotti: Get down here, or I’m going to use the elevator, and then throw your butt off that building myself!
Jumper: Why are you yelling at me!
Skotti: Cause, you’re an idiot, now GET OFF THE DAMN BUILDING AND STOP HOLDING UP TRAFFIC!
~~~

Bum: You done? I’m a bum, on Christmas Eve, and I don’t want your pity, or help.
Bass: Can it be that bad?
Bum: I don’t know, have you ever lived in a world where you don’t exist?
Bass: Not really, since I’m here and all
Bum: Such an Ellis answer. Alright Mr. Bass, well, now you do.
Bass: What?
Bum: My name’s Curly Mr. Bass, and I’m your angel.
Bass: You’re drunk
Curly: So? I’m a drunk and an angel, what the hell where you expecting? Clarence, Gabe, Micheal? No, you get me Mr. Bass.

Skotti: Get down off the building!
Jumper: NO!
Skotti: Get down here, or I’m going to use the elevator, and then throw your butt off that building myself!
Jumper: Why are you yelling at me!
Skotti: Cause, you’re an idiot, now GET OFF THE DAMN BUILDING AND STOP HOLDING UP TRAFFIC!
~~~
Click to expand...

Cad: Come on, the fake snow man even looks like you.

There is a lifesize fake snowman in the corner of the room, semi melting. E shakes his head.

ProjectX2: Ok, let’s skip the comedics of this okay? You speak to me in English, and not that strange dialect you speak. Comprende?
SlimJim: Indubitably
ProjectX2: Good, name
SlimJim: Charles Xavier Goodfellow the third.
Click to expand...

I love the fact that you are going to find the meaning of the holidays.

Bah humbug.
You must log in or register to reply here.