well might as well get this out of the way

8-issue long mini series by Brian Michael Bendis, and Leinel Francis Yu, will be the summer event of 2008, the premise is that after the destruction of the Skrull empire was destroyed yadayadayada

you guys know it

i found this on Brevoort's blog on marvel.com here:
http://marvel.com/blogs/Tom_Brevoort/


Tom Brevoort said:
People constantly ask what editors do (and the snarky ones talk trash about it whenever there's something they don't like in one of our books.) Among other things, each editor reads and responds with feedback to each and every script that comes in, working with the writer to make the story as good as it can be.

So I thought I'd post one of my e-mails here responding to a particular script, so that you could get a sense of exactly what I went back to the writer on. However, I clean out my e-mailbox frequently to avoid running out of space (which is a real possibility when you're talking about the size of some of the art files that we e-mail around), so as it turns out I don't have a good e-mail between myself and a writer about a published book.

So instead, I decided to share the following comments that I sent over to Brian bendis after reading his first draft of SECRET INVASION #1. Now, because we're still a few months from debuting the series, I've had to block out some of the commentary below--but hopefully there's enough left here for you to get a sense as to how this communication goes. After receiving this e-mail, Brian and I call one another, and we hash out the relevant points to both our satisfactions, and then he makes any necessary changes.

Here’s some feedback on SECRET INVASION #1, all relatively easy stuff to nip and tuck. This issue came together nicely.

1) From Nick Lowe on SWORD:

S.W.O.R.D. isn’t a wing or subsidiary of S.H.I.E.L.D. or the US gov’t. It’s a completely separate entity that has worked with S.H.I.E.L.D. on occasion. They’re an intergalactic peace-keeping organization that doesn’t operate under any government or world’s control. In ASTONISHING, Brand mentions to Maria Hill that the only reason that S.H.I.E.L.D. knows that S.W.O.R.D. exists is because of her relationship with Nick Fury.

Possible solution- Rather than an inspection, Dugan’s reason for coming to the Peak (what the ship is called) could be one of a regular meeting they’ve set up to share information. It could still be special that it’s Dugan coming (maybe Maria Hill is the usual rep from S.H.I.E.L.D.) and I could imagine that Brand has a prior relationship with Dugan since she had one with Fury. And I could also imagine a few of the S.W.O.R.D. agents being really into meeting him.

Agent Brand’s characterization- She’s not really an excited school girl. She’s a sarcastic, all-business, hard-*** who has little time for…anything, really. But, like I said before, I could see that she and Dugan might have a positive relationship. But we usually treat her like she’s the one with the knowledge. She doesn’t ask questions too much. One place in particular that I might ask for a simple change would be reversing the dialogue on pages 18-19 panel 5 so that the agent asks the question and Brand answers it. The only other thing that I might ask is that Brand, rather than radioing the Helicarrier, might be trying to radio S.W.O.R.D. HQ and it might be jammed by XXX XXXXXX.

2) Tony seems very casual about leaving the autopsy—which is about the most important thing he’s dealing with right now—to go chase the XXXXXX XXX, which is also important. So perhaps he should indicate that he’ll continue to monitor their progress remotely from his armor while en route, just so it doesn’t feel so much like he left two guys he can’t 100% trust alone with his only clue to the conspiracy. Also, a minor thing, you indicate that Tony has his helmet off in this scene, yet we see his POV from within the suit. So he should keep his helmet on for this to work.

3) Minor point on Page 12, Iron Fist has been in the Savage Land before, so maybe give this line to Echo.

4) I expect it’s all a matter of space, but Luke and company respond almost too quickly and too positively to XXXXXXX XXXX's call. They know XXXX stole the body and XXXX XX XXXXX XXXX XX, and they know they’re all wanted men, and that the Mighty Avengers have tried to ambush them at least once before. And yet, Luke immediately jumps to act on the info without even considering that this could be a set-up. So maybe what we need somewhere in here is a line that indicates that XXXX’s info might be shady, but that this is important enough to take the risk on.

omg bendis is a **** up. I mean, whatever, people make mistakes but to actually see how many he makes and us still be pissed that some get through is just beyond me now. Don't get me wrong, he's a good writer but you should still do your homework and not make **** up as you go. I really don't want him ruining Marvel Boy because he's an awesome character.


This is all very interesting.

That's more like a homage I'd say to New Avengers #1 since it wasn't exactly like that. The cover didn't have Sentry or Hawkeye on it.

I like mainly because the new avengers were formed because of something fishy like this happening, so if anything, I think the poster means the plot is coming full circle. 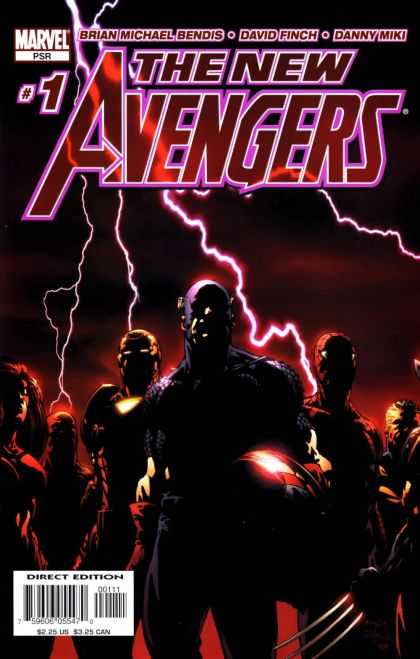 Sentry is behind Wolvie, granted not flying, but there none the less.


Ultimate Houde said:
As for Hawkeye, he's a poser
Click to expand...

I have nothing against Skrulls becoming the new zombies at Marvel.

But only if it means Robert Kirkman creates a series called "The Walking Skrulls".


Following Marvel's Creative Retreat, LiTG has learned that at least one of Marvel's top 20 books is being cancelled not due to sales -- but to Skrulls.


Following Marvel's Creative Retreat, LiTG has learned that at least one of Marvel's top 20 books is being cancelled not due to sales -- but to Skrulls.

It's not official, so there's nothing to [possibly] worry about yet (hence why it's a yellow light story).

I just wanted to point out that Hawkeye is not on that. It is, in fact, wolverine. You can tells by the claws. CLAWS.
Last edited: Dec 25, 2007


Lithium said:
I just wanted to point out that Hawkeye is not on that. It is, in fact, wolverine. You can tells by the claws. CLAWS.
Click to expand...


Ultimate Houde said:
Sentry is behind Wolvie, granted not flying, but there none the less.

As for Hawkeye, he's a poser and not in either covers
Click to expand...

Lithium said:
I just wanted to point out that Hawkeye is not on that. It is, in fact, wolverine. You can tells by the claws. CLAWS.
Click to expand...

Beat you to it


In the introduction of the New Avengers hardcover that collects Breakout and Sentry, Bendis says that someone in the first issue is a skrull................ don't know if that is a true fact, cause he laughs afterward, but if it true it could be considered good planning or coincidence

That's exactly what I thought.

I thought the summer event of 2008 was the thing Alex Ross is working on, or is that just regular Invasion. the thing with the time travel 12-issue series.
You must log in or register to reply here.
Share:
Reddit Pinterest Tumblr WhatsApp Email Share Link