I talked about this in the DC Nation thread but I think this could be a big thing so I'm going to make a thread for it.

DC’s Dan Didio announced the next weekly comic-book from DC at the ComicsPRO Annual Meeting. Called “Wednesday Comics,” this 12-week series will resemble an oversized comics section that folds down to a traditional comic-book size.

“It’s an experience now,” Didio said. “The art is larger. There’s a lot of story on each page.”

Creators involved with the project include Brian Azzarello and Eduardo Risso, the “100 Bullets” team, will create a Batman tale for the project. Neil Gaiman and Michael Allred will be involved with a Metamorpho project. Other creators named were Paul Pope, Walt Simonson and Dave Gibbons.

Jimmy Palmiotti and Amanda Conner will be involved with a “Supergirl” serial, and Joe Kubert will be returning to Sgt. Rock.

“I love the excitement, I love the energy that a weekly comic brings,” Didio said. “We’re anxious to stay in that business.”

I think this is a brilliant idea. The fact that it's got great creators, great characters, a unique format, free from continuity and is pretty much stand alone is brilliant. This is the kind of stuff that will attract new readers to comics. I am very excited for this. It's probably DC's best idea since 52.

And here's some art from Kyle Baker's Hawkman story:

No word on price yet but it shouldn't be too much since it's newsprint, a different format and it's trying to attract new readers.
Last edited: Mar 20, 2009

I think this is really brilliant.

I saw it this morning and was talking with my Graphic Forms teacher about it. I can't wait to read this.

That's such a great idea. And the teams are great. The one-page format means they can sign on tons of great artists and writers.

Adam Kubert writing Sgt. Rock with Joe Kubert drawing it is the greatest idea in the history of comics. This is the kind of book DC can use to open the door to other markets.
Last edited: Mar 20, 2009

Article with Chiarello about Wednesday Comics.

This is going to be fun.

Most pumped for Metamorpho by Allred and Gaiman. but I am generally pumped.

Here are some more teasers: 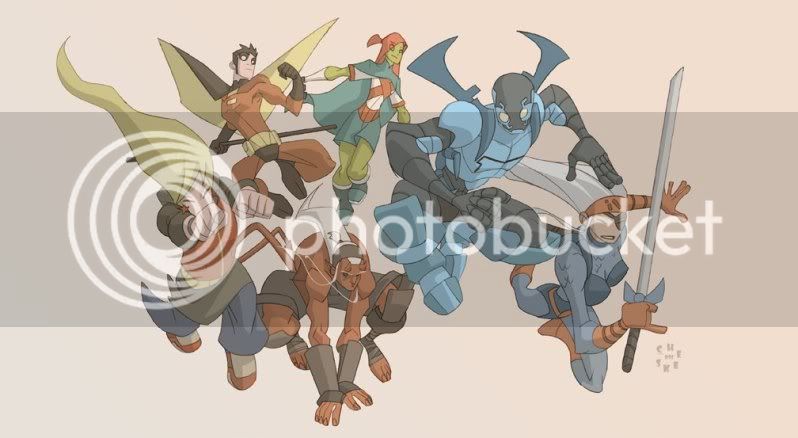 I love that Teen Titans one.

This looks freakin' awesome. The Superman pages are excellent!!!

Excelsior Club
This hasn't started yet, has it? And if not, when?

This should be so entertaining.

Bass said:
This should be so entertaining.
Click to expand...

Excelsior Club
No comments on this?

I thought it was awesome. Didio was absolutley right when he said it is an "experience" - I felt like I was reading expanded editions of the newspaper comics. I should have been in a recliner with a pipe.

I couldn't help but think of the parallels with Calvin and Hobbes. Bill Waterson had a knock-down, drag-out fight with newspaper editors when he decided (and his syndicate let him) forgo traditional Sunday panel layouts so he could experiment more with the medium and do larger strips with more detail and just more going on. This looks like it could be the fruits of his labor.

I liked pretty much all of the stories. The only one I didn't' care much for was Wonder Woman, but that was mostly because it was hard to read. I didn't care much for the art in Teen Titans.

I also loved it. I dragged myself around Tucson to find Ultxon's comic shop and buy a copy. First comic I bought in three months or so.

E said:
I felt like I was reading expanded editions of the newspaper comics. I should have been in a recliner with a pipe.
Click to expand...


Joe Kalicki said:
I also loved it. I dragged myself around Tucson to find Ultxon's comic shop and buy a copy. First comic I bought in three months or so.
Click to expand...

I picked it up. I've only looked at it. I ****ing love it. I've only read the Teen Titans one, and I'm kinda thinking of waiting until all 12 are out. Not sure. but every page was delightful, so I'm ecstatic.
You must log in or register to reply here.
Share:
Reddit Pinterest Tumblr WhatsApp Email Share Link